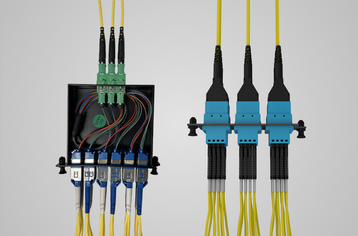 The Infinium acclAIM represents a breakthrough in fiber connectivity that delivers the lowest insertion loss available on the market by leveraging unique innovations, such as:

“Simply put, acclAIM is a revolutionary game-changer,” said Kristen Poulos, Vice President and General Manager Legrand Data Infrastructure, Legrand. “We are excited to bring to market the next generation of fiber connectivity that will prove to be the new standard for cost and performance.”

In addition, the acclAIM solution was honored in the 2022 Lightwave Innovation Reviews. Lightwave invited technology developers to submit products introduced or enhanced since March 2021 in various technology categories, for review by their independent panel of judges. At least three judges knowledgeable in the relevant technology or application reviewed each entry. Honors were given to solutions that achieved a score of at least 3.5 on a 1 to 5 scale.

According to one judge’s comment: “The Infinium accLAIM Trunk Cable Assembly certainly gets rid of a lot of unnecessary business (that can break) inside the enclosure and streamlines the connections.”

For more information on the Infinium acclAIM please visit, www.legrand.us/acclAIM.

Legrand is the global specialist in electrical and digital building infrastructures. Its comprehensive offering of solutions for commercial, industrial and residential markets makes it a benchmark for customers worldwide. Legrand reported sales of €7.0 billion in 2021. https://www.legrand.us/