You can cram in more for less

The new product was announced at the Digital Energy China Tour 2020, back in September.

Short and to the point 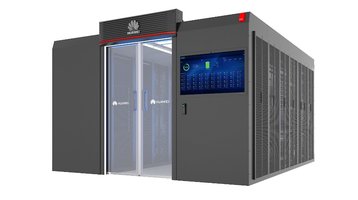 The modular product comes with AI applications integrated and an overall smaller footprint.

The 5.0 does not come with a traditional raised-floor nor does it need one, due to air conditioner pipes and electrical cabling routed through the top. This means equipment can be accommodated in ceiling heights as low as 2.6 m.

The data center also uses SmartLi UPS, a new branded lithium battery with low load-bearing requirements. The UPS is below 1000 kg/m2 for Tier III and Tier IV data centers. So UPS and IT kit like the 5.0 can be deployed in the same room, sharing the same space.

Huawei says that by doing away with a separate power room, the space needed for batteries is cut down by 75 percent.

The modular data center uses a 43-inch touch screen to allow technicians to monitor the data center's systems and integrate software management tools such as AI algorithms for the care and maintenance of the kit.