Edge networks demand data centers in towns, close to people. That’s a difficult location - but at heat reuse could be one benefit

We look to Sweden as a more tolerant, forward-looking nation in many ways, but not least in data centers. Last week we heard of a development in Sweden that sounds pretty exemplary: cooling-as-a-service.

At the start of this year, Sweden announced tax breaks for data centers, which will effectively slash their electricity costs by around 40 percent, by exempting them from Sweden’s high energy tax. If that’s taken into account, Sweden now has the lowest business electricity prices in Europe. 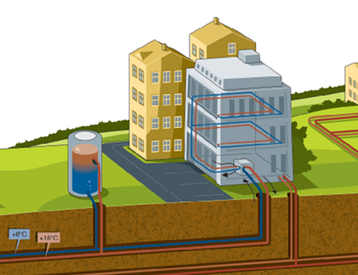 Cooling as a service – Fortum

It’s also got the Node Pole - an attractive area near Lulea, where Facebook and others have hydroelectric-powered data centers close to the Arctic Circle.

But the other thing Sweden has is district heating in its towns, where a utility provides heat for businesses and homes. It’s an idea which only really takes off in countries that have a culture that doesn’t mind paying for shared social benefits - and a cold climate which means that it’s worth sharing heat.

It also only operates in urban areas. Hot water or hot air are only valuable for a short time as they cool down - and they can only be pumped a short distance. District heat systems therefore require a heat source, such as an electric generator (in combine heat and power - CHP-  systems), or an industrial plant.

Now  the Swedish government is stepping in, to market the concept, aiming to increase the take-up of district heating, and to lure more data centers into Sweden in the process.

Last week, the first of four Stockholm “data parks” opened. Kista has 10MW of power to various greenfield and brownfield sites, and also has connections to fiber… and a district heating system.

Urban data centers are increasingly important as the “edge” of the network develops. Cooling-as-a-service is one advantage they have over remote sites

Above a certain size of data center, the park will arrange your cooling for you providing heat pumps in exchange for use of your waste heat - a true “cooling-as-a-service” arrangement.

If this site works, there are three more waiting in the wings. Overall, the government hopes to get ten percent of Stockholm’s domestic heating from industrial waste heat.

Urban data centers are increasingly important as the “edge” of the network develops, as they can provide fast speeds to consumers and Internet of Things (IoT) devices. At the moment, this means these facilities are more expensive than out-of-town cloud factories, because of high urban property prices. They alre also less efficient because they are smaller than the remote sites.

Cooling-as-a-service could turn this around, allowing an efficiency feature that is not available in remote sites. It won’t work for every city though: it will only work in locations which are cold enough to need shared heat, and have a rational enough society to provide it.