The many forms of modular

Modular can mean many different things

In my previous post, “five common myths about prefabricated modular data centers,” I highlighted their increasing adoption by organizations in data-intensive industries such as healthcare and financial services. However, in order to really appreciate this trend, it’s important to understand the technology and business drivers behind it. Read on for a quick primer. 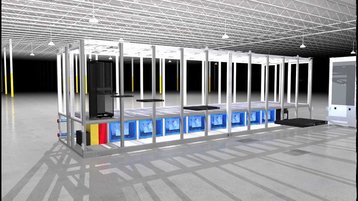 How did modular data centers happen?

In the late 1990s, when an enterprise needed to house their servers and other IT assets, they had three options:

Each of these options came with some drawbacks. Companies that built their own data centers often experienced “sticker shock” when they realized the hard costs involved – acquiring land in a suitable location; hiring an experienced construction team to build the facility; investing in the right mechanical, electrical and security systems, and so forth. Weather – and construction-related delays often led to budget overages and missed deadlines. Finally, these data centers were built speculatively – executives had to make an educated guess as to how much capacity they needed over several years.

Organizations that outsourced out their data center needs didn’t always fare better. Finding a data center in the right location often posed a challenge. Some IT teams tended to be “server huggers,” who want their technology assets in close proximity to their organization’s headquarters. They were also concerned that moving into an outsourced data center meant having to use pre-set technology and vendor services from the data center provider.

Another challenge with outsourcing data centers was that IT teams had very specific location requirements. For example, they wanted the data centers to be located away from certain industrial operations or commercial flight patterns. Not all data center providers are created equal, so finding an experienced partner with the right infrastructure and systems in place was also difficult.

Some enterprises leased or purchased existing buildings and performed tenant improvements to transform them into data centers. One benefit from this approach was that they didn’t have to build the structure themselves, which saved on capex and shortened timelines. However, since these structures were not purpose-built to serve as data centers, there were often physical limitations that forced the enterprise to compromise on their standards. Finally, leasing a building exposed enterprises to rent increases as well as the possibility of “getting the boot” from their landlord.

Enter modular data centers, or what the industry often refers to as prefabricated modular (PFM) data centers. Using the same technology and components found in traditional data centers, PFM data centers are constructed in a climate-controlled facility with mechanical and electrical systems integrated prior to shipment, as well as varying levels of the IT stack. The data center components are then transported to the customer site and assembled like building blocks that accelerate the construction schedule while providing potential cost savings. The resulting data centers are fully self-contained, weather-tight and only require utilities and network connections.

Tired by expense, as well as capacity and systems limitations found in traditionally constructed data centers, enterprises started turning to PFM data centers for their flexibility and scalability – with more organizations following suit. Compute space, power and cooling are matched to current IT demands, so organizations only pay for the facilities they need at any time. And as IT demands change, modules can be added like building blocks. This keeps IT and facilities continually aligned without risk of over- or under-investing in data center resources. Finally, some PFM data centers are technology and vendor agnostic, so IT teams have the freedom to use any technology suppliers they choose without fear of vendor lock-in.

Containerized data centers were the first generation of modular data centers. Containers are typically built using an ISO (International Organization for Standardization) shipping container. While designed to house infrastructure that supports power, cooling systems and/or racks of IT equipment, these containers are limited by their size and construction. As a result, they aren’t as customizable as PFM data centers and are generally a constrained solution. However, they are a viable solution for organizations that need highly mobile units that are easy to transport.

What is driving adoption?

The explosion of data generated by mobile apps, the Internet of Things (IoT) and industries that rely heavily on data are key factors. Global organizations are rapidly opting for modular data centers, citing their high performance, energy efficiency, and “pay-as-you-go” model. As a result, the modular data center market is estimated to grow from $10.3 Billion in 2016 to $38.3 Billion by 2021, at a compound annual growth rate (CAGR) of 29.94 percent.

What has kept you from implementing PFM data centers? If you have implemented PFM, what was your experience? Please share your knowledge for the good of all.