The first Rack Scale server is aimed at telecoms and lacks Intel’s silicon photonics. What the hell happened?

Intel has been talking up its Rack Scale Architecture for years. We’ve seen reference designs, proclamations of loyalty from major server vendors, and a development plan for the next decade or so.

There was one thing missing – an actual product. Enter Ericsson Hyperscale Datacenter System 8000, the very first Rack Scale design, announced not at Intel Developers Forum or CeBIT, but at Mobile World Congress – an event where, until very recently, servers had little presence. 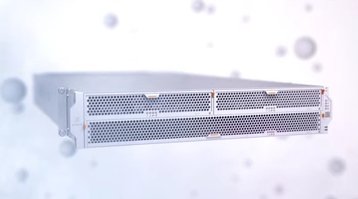 This announcement could define the design of hyperscale data centers for years to come. And yet, HDS 8000 will not feature Intel’s silicon photonics, which has been positioned as the centerpiece of Rack Scale. Instead, it will use the PSM4 optical interconnect developed by US-based Luxtera.

Rack Scale is a disaggregated architecture which allows replacement of individual rack components, while the whole cabinet behaves as one large virtualized server with shared cooling and power. Developed by Intel, it relies on either Xeon processors or Atom SoCs.

At the core of Rack Scale are dozens of strands of optical fiber – they act like blood vessels or nerves of the system, allowing those individual components to talk to each other using standardized hardware APIs.

This approach removes the need for ‘top of rack’ networking and results in much denser systems – up to 1.5x more dense, by Intel’s count.

Until now, whenever Intel would talk about Rack Scale it would mention silicon photonics – a technology which integrates a hybrid silicon laser and electronic components onto the same die, using cheap semiconductor manufacturing methods. When we are using light instead of electrons, data can be transported internally at speeds of up to up 800Gbps in each direction.

At least part of the reason why Rack Scale took so long to get to production lies in Intel’s difficulties with the silicon photonics manufacturing process – something it wasn’t afraid to admit publicly. Now, it turns out the first Rack Scale appliance won’t feature Intel’s silicon photoniccs at all – instead Ericsson will be using  1310nm multi-ribbon fiber and silicon photonics chipsets from Luxtera.

Not many details are known about the HDS 8000 itself. We know it will feature optical interconnects. We also know how it will look like – courtesy of this epic promotional video – but what we don’t know is what’s inside the box.

There are more questions to be answered - for example, why did Intel choose to peddle Rack Scale to telecoms? My guess would be because they are desperate. Network Function Virtualization (NFV) is not being adopted fast enough, and cloud–based services like WhatsApp or Snapchat are eating network operators’ lunch.

When somebody tells you that you can lower your costs, improve agility and have as much computing muscle as the public cloud vendors who have caused you so much grief – well, you might start to listen.

Then, there’s the reputation of Ericsson – a Swedish company that has been making telephones since 1879. You really don’t get much more weight to your name (unless you’re Bell Labs).

Traditional data center players have chosen to focus their attention on the tangible successes of the Open Compute Project rather than latent potential of Rack Scale, but in fact the two are complimentary - OCP is focused on the hardware specification and modular upgradability, while Rack Scale takes care of management firmware and APIs.

The current reference implementation of Rack Scale is actually based on OCP hardware, and will be presented next week at the Open Compute Summit.

Intel is also invested heavily into ‘microserver’ projects like HP’s Moonshot or Dell’s PowerEdge. It doesn’t see Rack Scale as a competing architecture as much as the next stage of evolution – the company previously said that microserver compute ‘sleds’ could fit perfectly into a Rack Scale server.

And yet, the joint announcement of HDS 8000, made by both CEOs standing side by side, didn’t generate nearly as much coverage as it should have – the inherent danger when announcing new products at an event as news-packed as MWC.

We will not see HDS 8000 in the flesh until the fourth quarter of 2015. By this time, several more hardware vendors are likely to announce their own implementations of Rack Scale. But the most important question is whether Intel can make its silicon photonics work in time – otherwise customers will buy their photonics chipsets somewhere else. 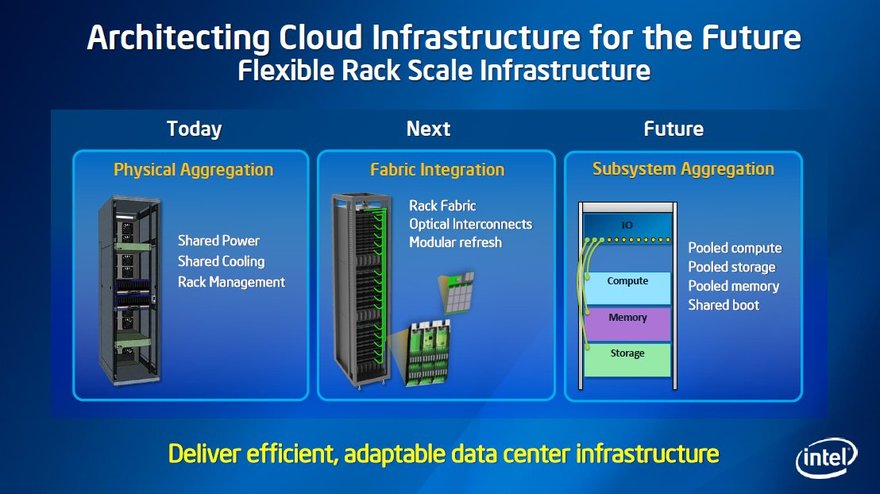