Bloom Energy has large customers, but information (and installations) are a trickle not a flood

Bloom Energy has had $1 billion of investment. It’s promised a clean source that can simplify power distribution at data centers and elsewhere, replacing the traditional uninterruptible power supply (UPS).

It’s also been pretty secretive. It’s promised that it will go public and float on the stock market - but the date for that keeps getting pushed further into the future. And financial journalists are getting frustrated about the company’s habit of ducking questions.

This is a shame, because there is interesting and important stuff going on here. Bloom has been in existence for 15 years and is famously based on technology originally developed for Nasa - but there are a number of other firms also working on fuel cells. 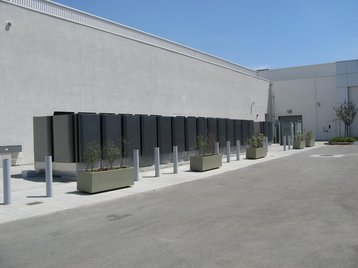 Fuel cells are “clean” because they release the chemical energy in hydrogen or hydrocarbons using a catalyst, without burning. As they can be fed with natural gas from biological sources such as composting, they can be renewable - though in the US now, it’s more likely the fuel is fossil fuel natural gas from fracking.

If they are used for on-site generation, becoming the primary power source for a site, then Bloom says no UPS system is needed, as the electric grid can provide the backup.

An increasing number of large-scale customers seem to agree. Apple and Google have adopted Bloom boxes, and eBay uses them for primary power in its Utah data center.

Earlier this month, CenturyLink switched on the Bloom Energy Servers at its Irvine California data center. To me, the interesting thing about this deal is, why weren’t the boxes working already? Bloom and CenturyLink announced this deal some eighteen months ago.

Eighteen months to switch on?

Apparently, that’s how long it takes to get your Bloom Energy boxes delivered and tested, and ready to use in anger. Perhaps that’s normal in this field, or it may be a sign that this is still new and a little bit experimental.

Overall, we can’t really tell how Bloom is doing, as it is a private company, so its finances are somewhat shrouded.

More importantly, the technology and its performance characteristics aren’t terribly public. It obviously works, or it wouldn’t satisfy customers like eBay and CenturyLink and, in the wider world, Ikea.

But other fuel cell makers have had trouble with long term reliability of their products. Solid oxide fuel cells operate at high temperatures and most of the commercial ones wear out in time and have to be rebuilt.

Bloom is selling its products on the basis of a “total cost of reliable power”, comparing the use of its fuel cells against the use of conventional power distribution systems backed by diesel generators and batteries.

Big customers using the technology will have done these calculations - but those of us outside that loop will have trouble, since there is no public data on the reliability and rebuild costs of Bloom Energy servers.

It’s also not clear how much of its business so far is based on state subsidies.

All that aside, it is clear that Bloom is making a good case - both environmental and economic - for using fuel cells as primary power for data centers. We are looking forward to more information.