The path to an AI-connected government 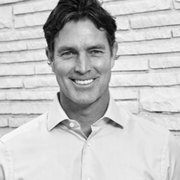 Chad Steelberg is Chairman and CEO of Veritone

Our government has an unprecedented opportunity to use artificial intelligence (AI) to dramatically modernize the public sector. While experimentation with AI-based technology has begun, we’re still far from full integration.

Paving the path to an AI-connected government may sound like a terrifying prospect to some, but it’s inevitable as AI becomes more pervasive, powerful and pragmatic. Other nations like China are already blazing this trail on a global level. In the US, the question is not whether to deploy AI, but how to get started. The time is now. In fact, President Trump recently signed an executive order laying out a national plan to boost AI technology, directing all federal agencies to look into launching and expanding AI initiatives that promote their missions.

It’s rare for any one solution to increase speed, enhance quality, and reduce costs at the same time, but AI-based technologies offer those results and more. According to Deloitte research, new AI applications could save hundreds of millions of staff hours and billions of dollars each year, potentially freeing up 30 percent of the government workforce’s time within five to seven years.

The AI trajectory: Moving humans from “in” to “on” to “out of” the loop 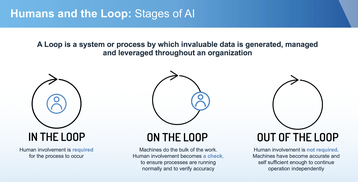 Our government is made up of people doing a series of tasks, or “loops,” many of which are repetitive and very time-consuming. When people perform these often mundane and repetitive tasks they are “in the loop.” It’s these very tasks that are easiest to optimize with AI. By applying AI to these tasks, humans can move onto more cognitive tasks, remaining part of the final review and approval process, therefore moving move “on the loop.” This can result in advancement opportunities for people as well as significant time savings.

Eventually, loops can start to be connected - that is, one task can be completed autonomously, kicking off a subsequent task based on the outcome of the prior - decreasing the need for human intervention and involvement with both of these processes.

“Out of the loop” describes an ecosystem of fully AI-connected “loops,” moving humans away from even a cursory review of outcomes and instead fully “out of the loop.” Of course, being “out of the loop” is not always the end goal; there are certainly many cases where humans should stay “in” or “on” the loop. But, when the situation is right for AI to play a role, there are many opportunities for people to re-allocate the time and resources they’ve saved to other more pressing priorities and take advantage of the value AI brings to the table.

One area of the government where AI can make a significant impact is the public safety sector. Today’s police and justice departments are paddling upstream to try to apprehend suspects and close cases quickly and resolutely. Typically, processes like suspect identification can be very arduous. Investigators review photos or video surveillance of suspects, quite often spending days and even weeks trying to manually match it by looking through a binder or computer database of known prior offenders.

AI-enabled facial identification can make this process easier and up to 90 percent faster, however, very few law enforcement agencies have the ability to perform automated facial identification against a known offenders database today. This results in an immense waste of resources while significantly increasing the time it takes to solve crimes.

When AI technology is allowed to accelerate the process, the results are much different. For example, an AI-powered application that allows investigators to quickly load a suspect's photo or video and receive a list ranked by statistical matching in their known offender databases within minutes. The process works much like a fingerprint left behind at a crime scene which can be searched in a database for a match. In many cases, this helps public safety agencies significantly accelerate their investigations and helps them apprehend repeat offenders.

One California Police Department uses AI-powered tools connected it to its known offender database. Once a possible suspect is identified, the investigator confirms the match and has the option to attach pertinent notes to share with others across the Police Department. Unknown faces generated from crime scene footage but not present in the department’s databases, become reviewable in a list for investigators to dismiss or add to their existing Persons of Interest database.

As a result, the department was able to harness the power of its booking database to identify more than 50 suspects over the course of six months. In this instance, the human is “on the loop,” still involved in the suspect identification process, but leveraging AI technology to save potentially thousands of hours of manpower and financial resources.

These kinds of savings become even more pronounced when you consider the explosion of audio and video surveillance footage. With increasing numbers of police departments using body-cams and leveraging traffic cameras and cell phone-captured video evidence, the amount of audio, video and still image footage requiring screening is one of the biggest challenges for today’s law enforcement professionals.

In addition, a new law recently passed in California (and considered to varying degrees in additional states including New York, Nevada, and Rhode Island) introduces a new, incredibly time-consuming challenge if done manually. It requires any audio or video footage obtained by state police departments be made available to the public upon request within 45 days of the footage being collected unless it is part of an active investigation. However, before such information is released, it must be redacted, removing any content that might divulge the identity of innocent people or other Personally Identifiable Information (PII).

Again, when humans are heavily involved and “in-the-loop,” manual redaction processes require extensive manpower and expertise to review each frame and make edits. In fact, many police departments have reported that this process may take 10 minutes or more per person needing to be redacted per one minute of elapsed time in the video itself. But when AI technology is introduced, agencies can streamline and accelerate the redaction process, allowing them to not only meet legal requirements but to reap the benefits of time and cost savings.

That AI will continue to play a major role in government is inevitable. But the path to an AI-connected government is not about allocating billions of dollars to overhaul the way our government runs. The path starts with identifying the repetitive processes that can be augmented or replaced with artificial intelligence.

As more of these tasks are identified, connectivity between the different “loops” will become increasingly important to leverage the full potential of AI. But as this evolves, the path needs to focus on building up that muscle tissue that reminds humans that it’s okay to move “out of the loop” to allow AI to address current challenges in our system and first and foremost keep the public safe.