Neil Fraser is director of defence and space programs at NSSLGlobal

How the British Army's land forces communicate effectively in all situations

Whether it’s standing on the top of the hill using a telescope to view the battlefield in front of you to determine who are in red coats and who are in blue coats, or putting people in aircraft (or utilizing uncrewed platforms) or having space-based sensors, having some sort of advantage in terms of the way you gather, process and share information has always been a fundamental military requirement.

But for modern warfare 'information manoeuvre' is more than a buzzword. It involves the use of information in all its forms to understand the operating environment better than anyone else and subsequently to make the most of that advantage (and hence the manoeuvre relationship to ‘information advantage’). The necessary scale and speed of information has changed almost beyond recognition. Think the Internet of Things, artificial intelligence, machine learning: people throw these words around, but with the scale and the way information is now embedded into every single bit of the infrastructure, taking it seriously requires an entire cultural shift which the British Army and wider land forces are clearly engaged in from the top down, with talk of the “digital backbone” and information being woven into doctrine and programmes.

The challenge, as ever, is gearing the intellectual and cultural to the physical – and delivering platforms (including the person) ready to accept regular upgrades, with a “plug and play (ish)” approach to technology around a stable but flexible core network extending from the Enterprise to the Edge. 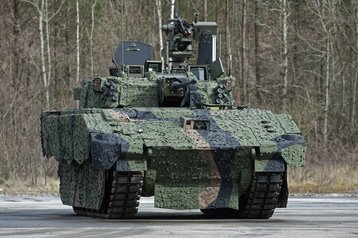 Right at the tactical edge, the critical balance has to be struck between

The devil is certainly in the detail and recent events in Eastern Europe and the Middle East have clearly demonstrated the capability and intent of our potential adversaries.

Demand, and expectation, have grown considerably since the turn of the century, and certainly in the last decade, where the Afghan campaign particularly showed the importance of delivery of services normally used by a division, down to company group level (so 100 or so people, commanded by a Major).

Add in the additional pressures of a technically adept adversary, and the lack of a static and resilient communications infrastructure, which was in place and enabling at least the latter half of the Afghan campaign, and the challenge is clear. Delivering full-motion video, live intelligence products or other operational information to the company group, and wider where appropriate, and not drowning the recipient, or loading them with too much equipment is a real challenge, and one that is being worked on by de-risking activities. And then beyond land, there is the challenge of working across different defence programs at the network layer, upon which the applications and information sit.

Most of my military career was spent leading organizations delivering communications services, including on “early entry” deployments into the Balkans and Afghanistan with 16 Air Assault Brigade.  As a provider, I understand what matters to commanders and users at many levels and the challenges of delivering to them.  But I was also a user and, for example, spent a busy period as an Operational Planner / Team Lead in the high readiness UK Joint Force Headquarters, reviewing contingency plans and exercizing for rapid operational deployments – including to the Lebanon, Malawi, the Falkland Islands and across Europe.

Key to these roles were two main things in command and control (C2) terms which will be imperative in meeting the demands of modern land forces. First is the ability to be able to deploy as a small team with enough equipment to be able to access defence information securely from anywhere – whether it be hotel rooms, embassy buildings, temporary field locations or old airfields – and to do so in a relatively low-profile way if required.

Secondly, is being able to convert the above rapidly into a small-scale military deployment or to deploy from the outset as a military early entry HQ which might require fully rugged capability and more “tactical” comms. This may perhaps also lead to multiple “points of presence” such as the establishment of mounting bases, assembly areas, liaison teams and so on.

Both these tasks clearly need the delivery of IT able to access multiple networks for connectivity back to the UK or other allied nations.  These operational planning roles usually also involve wider government engagements and working with in-country organizations, so access to the internet and strategic information is key, as are communications for the team to operate safely in a local area, or more widely and to communicate to in place embassy teams and other organizations.

Satellite phones and Push to Talk (PTT) systems therefore have a part to play alongside classic military radio system offering teams and smaller units robust and reliable communications without the need to deploy lots of specialist people and equipment.  This is a key factor when defence engagement and training tasks are on the increase, as is pressure on manpower, and teams need to keep well informed whilst not being exposed to hostile intelligence action by relying on local services or insecure solutions.

And when it comes to wider deployments or combat missions, the overlay and in some cases integration of satcom services into combat radio systems will be critical. It is this that will enable Air Assault and Strike formations to deploy rapidly, disperse and then carry out their tactical tasks provisioned with the information they need from within and beyond their formation. It is increasingly clear that the MOD see that building capability for rapidly deployable and flexible communications is key, and that through close, and commercially well managed, collaboration between industry and the armed forces, best-of breed solutions can be refined and delivered to underpin Information Manoeuvre and deliver advantage.