Neil Fraser is director of defence and space programs at NSSLGlobal

The UK and her allies face a rapidly changing world with greater unpredictability than at any time in recent history. Proliferation of technology, hybrid approaches and the ‘grey zone’ are making modern threats harder to identify and mitigate, with our adversaries looking to disrupt and disable both civilian and military targets to achieve objectives without engaging in open hostilities or clearly crossing the threshold into armed conflict.

In order to influence and be prepared to meet these threats, robust communications and the ability to share information are critical. Writing this in February, we still await the results of the Integrated Review. So looking back to 2015 the UK Government released the National Security Strategy and the Strategic Defence and Security Review (SDSR15), which said the threats faced by the UK have "increased in scale, diversity and complexity" since 2010, and highlighted four key threats from: terrorism, extremism and instability; the resurgence of state-based threats; the impact of technology; and the erosion of the ‘rules-based’ international order. Identifying and responding to these future threats would require an entirely new way of operating which, it is assumed, will form key elements of the Integrated Review and the development of the Multi-Domain Integrated force which is more than just an evolution of existing forces, but recognizes the new domains of Space and Cyber, how these cross-cut, and the increasing role of information and influence.

The future of land forces 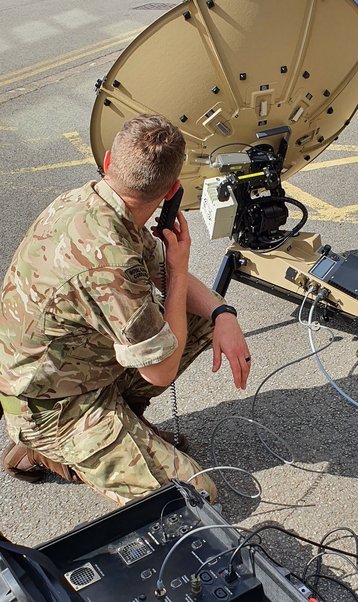 For land forces specifically, the future of the Army (Army 2020 Refine) and Future Commando (for how forces will operate afloat and ashore) are reshaping the way British land forces are structured, equipped and operate. Both lean towards smaller, rapidly deployable units able to operate independently in hostile environments. Similar reforms are also happening across multiple NATO allies.

SDSR stated that the Army must routinely be able to reorganize for a range of other tasks and operations, at increased readiness. Whilst there is a focus on being able to deploy en masse, at division level, rather than brigade level as previously, the Army has also started a shift towards rapid strike capability and the ability to put forward smaller units in an ever-changing political environment. This includes the formation of armoured infantry ‘strike brigades’ able to quickly deploy overseas and defeat light forces on arrival, as well as the creation of the Specialised Infantry Group, designed to assist partner nation forces overseas in encouraging stability, security and supporting conflict prevention and designed to operate in Europe, the Middle East and sub-Saharan Africa. All of these units and approaches have a greater demand for information, including reach back to the UK, and will operate in smaller more dispersed teams than traditionally, with major implications for the network to enable information manoeuvre.

At the same time, Future Commando, described by the Royal Navy as ‘the most significant transformation and rebranding programme since the Second World War’, is designed to modernize the way the Royal Marines and supporting RN and Army units operate, delivering a force ready to deploy around the world, on tasks ranging from reconnaissance and influence, to warfighting, and to humanitarian duties, in areas as far and remote as the Arctic Circle. From a technology standpoint, it will change communications demands for small groups operating afloat and then on land, often behind enemy lines, that need to establish satellite communications quickly and exploit other cutting-edge technology in the deployed environment, which the Autonomous Advance Force (AAF) exercises are already experimenting with.

The Royal Marines, and wider Royal Navy, have made huge strides with a series of focused innovations and programmes. The Army is also investing in having a persistent innovation and R&D approach, notably with the establishment of a Defence Innovation Centre in Dorset, leveraging various Trials and Development Units (TDUs), industry, local organizations and across wider defence in the “Army BattleLab”.

In the Army Warfighting Experiment (AWE) in 2020, NSSLGlobal supplied a rapidly deployable Ku band Satcom terminal and multi-bearer (LTE, WiFi, local ADSL or satcom) multi-security domain baseband systems. These exercises and focused innovations help MOD understand “the art of the possible” but in a practical sense! Together with the BattleLab this will help develop new ways of doing business, and best leverage current and emerging technology with the user at the core.