Some pundits are afraid of AI. The only computer that scares me is IBM’s Watson

Artificial intelligence is a hot topic. Sure, we’ve been talking about it for decades, but with the latest advances in machine learning and natural language processing, we’re on the verge of a breakthrough.

So close, in fact, that some enthusiastic salespeople are jumping the gun. Being a part of this industry, you’ll have seen announcements that one product or another delivers a functional AI. Empty promises, of course – we’ve yet to see a single computer system to conclusively pass the Turing test.

None of these products intimidate me – except one: IBM’s Watson. 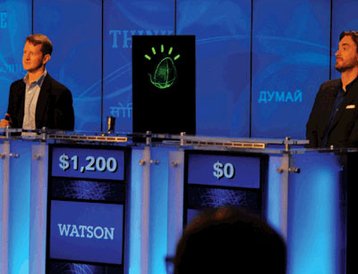 The Watson cognitive computing platform was developed with a specific goal in mind – to win Jeopardy!, an American quiz show, where participants are presented with answers and must phrase their responses in the form of questions.

That’s not a Turing test, but it’s a good demonstration of language ability – and in 2011, Watson managed to beat two of the best players in the show’s history and walked away with one million dollars. The academic project was deemed a complete success.

And then, in January 2014, IBM announced it was creating a separate business division around Watson. That’s the same month it agreed to sell the entire x86 server business to Lenovo. So what is it about cognitive computing that makes it more valuable than IBM’s System X server range?

The software platform for Jeopardy! was built around IBM’s Power silicon and a 4TB “brain” which, among other things, stored the full text of Wikipedia. Watson was designed to mirror the cognitive process of human beings. First it needs to collect raw information, assembling what IBM calls “a corpus of knowledge”. The information is then pre-processed to expose patterns and connections in a process called “ingestion”.

Next, Watson needs to be trained by a human expert to learn how to interpret this data. The expert loads question and answer pairs that become the basis of Watson’s decision-making. This ongoing feedback process will define the system’s future use – is it going to be healthcare, retail or finance? At this stage, Watson can begin to adapt to different languages, different cultures, learn the jargon and how to avoid the common mistakes. Only then is it ready to assist humans.

Just like us, Watson has to specialize to master a particular field. And like humans, it needs to constantly learn from others in order to become smarter, better-suited to the task at hand. This creates a large degree of flexibility, when compared with the rigid logic of conventional computer programs.

The first commercial application of Watson was announced in 2013, and it shows just how serious IBM is about AI technology. The system was deployed to help diagnose cancer patients and choose the best form of treatment, taking into account their medical history, advances in research and clinical trials.

With enough training in watercooler conversation, will the same system be able to deceive its opponents into thinking it is human, passing the Turing test?

IBM has a history of playing games to prove a serious point: in 1997 it developed Deep Blue, the first computer chess-playing system to beat a reigning world champion. Deep Blue forever changed the way we look at computers. Watson is here to finish the job.