How many offices will become data centers?

As we bring our offices home, servers move into the offices

It seems like a sign of the times. As people increasingly work from home, using digital services to keep connected, office space in the center of cities is lying empty. So in Portland, a landmark office block is becoming a multi-story data center.

The Union Bank tower, on SW Washington and SW Park in the center of Oregon's largest city, is being sold by its owners to convert to a data center. It's not quite as simple as empty office space filling with servers - but there are signs that things could be moving in that direction.

Could offices house the homeless?

At the start of the Covid-19 pandemic, office workers were instructed to work from home if possible. It seemed like a temporary measure, but many of us have come to like it. We travel less, and spend more time with our families (or our pets or gardens) but we're still connected to our jobs. 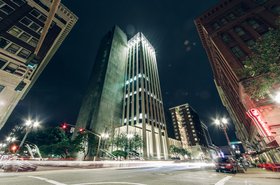 For some, it's been a pleasant surprise to find it's possible. Others have been itching to do more remote work for years, and it's been a big relief to them when their employers finally saw the light, and recognized that staff don't have to be present and visible in the office all hours. Things still get done.

For others, of course, it's been a frustrating period where they've had to battle with home-bound distractions, and find motivation despite a lack of colleagues - and some bosses are adamant that staff don't exist unless they can see them.

And then there have been the hordes whose jobs can't be done remotely, many of whom have had to endure worse working conditions for the last year, along with the risk of disease.

However that all plays out it's clear that fewer people will be at office desks now, and companies, DCD among them, have adjusted to remote working, a smaller office space.

What happens to those empty offices? It's tempting to think that many could be converted, like the Union Bank tower - but that building is something of a special case. It's on the central junction where most of Portland's fiber links meet, it already has a meet-me room and some 18 existing data center spaces amongst its office tenants.

It's also not an example of an empty building: it's still 72 percent occupied, despite the departure of its eponymous tenant.

The Square Mile of the City of London plans to welcome 1,500 households into vacant offices in the next five years

That building happens to be one where there's an obvious buck to be made in converting it fully to data center use.

In other cases, cities are looking at turning office space into housing. The Square Mile of the City of London currently has few residents (less than 10,000 apparently), but the City plans to increase occupancy by 20 percent with another 1,500 households moving into current offices over the next five years, according to reports.

These are described as "low-cost, long-term lets in vacant and little-used spaces," and we must be careful. These might be expensive investments, or they might be ill-converted In the UK such changes have been allowed for six years under "permitted development rights," and it could result in living spaces that would never have met the criteria for newly built dwellings, and don't have a community around them.

How many do we need?

Planners might prefer to have data centers, which are clean and have low demands on roads and amenities. City centers are also a good place for data centers, if the space is affordable, as they are close to many users for Edge applications. They can also find customers for waste heat, as is being increasingly encouraged for reasons of sustainability.

But planners might also question how many data centers a given area needs. As "ghost" properties, largely unstaffed, they won't be any help to the sandwich shops and bars which are in dire straits as office workers leave.

And, even if the market is there, it's becoming increasingly clear that data centers can push the electricity demand a given area above reasonable limits. In Ireland, for instance, an increasingly vocal protest movement is pointing out that without data centers, Ireland could have a level demand for electricity, and a chance of meeting de-carbonization targets.

Hence the recent moratoriums and regulations applied in Singapore, Frankfurt, and Amsterdam to limit or pause data center building.

Overall, don't expect city centers to fill up with data centers as workers move out. Their needs are quite different.