And the winner is….

After all the upsets of the last year, anything predictable is a relief. And in the data center world, few things are more predictable than the annual Greenpeace Clicking Clean report, which comes out around the time of the Golden Globes and the Oscars. 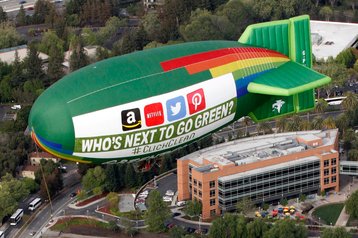 This time around, Switch (of SuperNAP fame) gets a high score, along with Apple, Google and Facebook. And Amazon Web Services (AWS) and Netflix get failing grades, largely for a lack of transparency.

A large number of US providers - including AWS - have now committed to eventually going 100 percent renewable, so Greenpeace might feel it’s done its job. However, since AWS hasn’t given any details, it loses marks.

And, Greenpeace has expanded the report’s terms, by including Asian cloud firms, including China’s Baidu and Tencent, who both come in for criticism. This part of the story could prompt one to ask how much notice Chinese firms will take of Greenpeace.

Among other things, Greenpeace has been criticized for addressing private firms, and not governments, who could change policies, and also for concentrating attention on data centers who are a small and well behaved sector.

Commentators including energy expert Ian Bitterlin have also pointed out that data centers signing up to green energy deals are not actually using the renewable power themselves, but merely claiming “green” Watts, and displacing the “brown” Watts to other users.

Maybe so, but we are in a world where fossil fuels are harmful. It’s also true that renewable sources and fossil sources of electricity are reaching parity (and in many markets renewable is way cheaper).

Greenpeace has expanded the report’, criticizing China’s Baidu and Tencent

Despite this, renewables are still not chosen often enough, and a report like this raises the profile of firms that have made that choice.

But it’s certainly true that governments, including the UK administration and the incoming US regime look increasingly short-sighted, as they go luke warm on the Paris accord and shift support from the future (renewables) to the past (fossils and fracking).

I think Greenpeace’s past activism has earnt it the right to comment on this subject. Its message may be imprecise and emotive, but it’s on the right side. It’s also in harmony with the providers that are moving to renewables, by giving them a platform to take some kudos.

In a way, the Greenpeace report has something in common with the Oscars. You can take issue with who won, and reading the 104-page Greenpeace report is about as dull as hours of watching movie stars backslapping at the Academy. You may have no intention of watching any Oscar-winning movies, or buying into any of Greenpeace’s “top” providers.

But the common factor, one would hope, is an incentive to improve standards. The Oscars (arguably) encourage better movies, and Clicking Clean (probably) prods providers into better energy usage.