Cloud providers are asking for green tariffs. Electricity firms are not playing ball

After a lot of controversy, the regular Greenpeace “Clicking Clean”  reports have settled into a role where they provide something for everyone - and the latest edition is no exception.

Clicking Clean picks green winners who can boast about the endorsement. It finds villains for environmental activists to attack. And the report itself is a useful target, for those in the industry who want to criticise the way it over-simplifies the business of running data centers.

But the Clicking Green report has real value. It’s got the right aims - to encourage efficiency and renewable energy use. It ranks cloud providers according to their energy strategy, including their use of renewable energy, their “advocacy” for renewables, and their efforts on efficiency and sources. It also marks them for transparency. 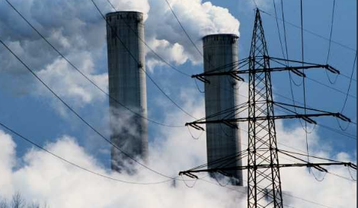 This report provides the usual green heroes and villains in the cloud, but it also turns its sights on the players behind the scenes - the utilities.

Service providers might criticize the rankings, saying they have other things to juggle, including reliability, security and price. And it is true that Greenpeace doesn’t understand everything about data centers. It’s an outsider - but that means it will say things that insiders never would.

Greenpeace gives Apple straight A’s across the table, which is fair enough, because amongst big tech firms, it’s a strong advocate for using renewable energy. A year ago, CEO Tim Cook famously told shareholders who don’t like Apple’s renewable policy they could invest in some other company. 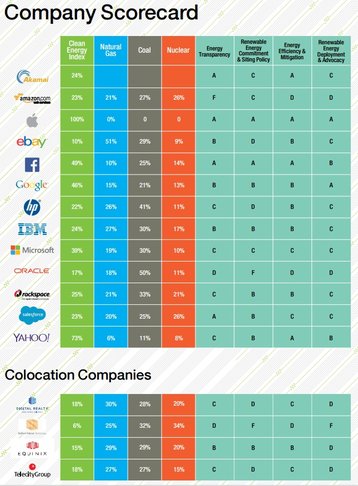 Amazon is the villain. It is given a low score for efficiency, which I’d say is unfair as you don’t run data centers as big as Amazon without having to watch the power bills. It also gets one of the report’s only two F-grades for transparency. Amazon promised in November it would eventually use 100 percent renewable energy - and gets a C grade for its commitment - but it scores low on transparency because it hasn’t yet said how it will get there.

The other F-grade in the table goes to Oracle, by the way, for its renewable energy commitment. It’s one of the few big cloud players that hasn’t got a promise to go renewable, let alone a roadmap.

In fact, Oracle actually scores lower than Amazon across the board. But Amazon makes a better target for Greenpeace (like Apple and Facebook before it), because it has a consumer brand, and Greenpeace supporters will have heard of it.

But utilities are the real bad guys?

I’m more positive about Greenpeace’s attack on the utility companies, many of whom have virtual monopolies, and show a lack of enthusiasm in getting power from renewable sources.

Duke Energy in North Carolina now offers a green tariff, prompted by Google and Facebook who have data centers there. But that tariff is a failure, says Greenpeace; so badly designed that no one, not even the cloud giants, has signed up to it: “the design and price structure … imposed by Duke have been such a barrier that thus far no companies have agreed to purchase renewable energy under the program.”

Dominion Resources in Virginia, and the Taiwan Power Company are also singled out by Facebook for offering green tariffs that make them look good on paper - but which charge a premium so high that no one is signing up for them.

Facebook claims that extortionate green tariffs are an anachronism, as renewable energy is increasingly available at parity with fossil power.

The Internet - like the rest of us - must ultimately move to renewable energy. If companies are blocking this, they deserve a bit of attention from the activists.