Get these humans out of my data center! 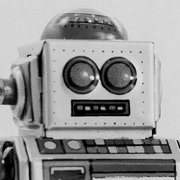 I, for one, welcome our new robot overlords

Humans were never meant to work in a data center environment. They are soft, fragile and susceptible to electric shock. They forget best practices, make mistakes and invite security risks. They are driven by emotions like anger, greed and a desire for revenge. And yet we still design data centers around people, not around technology.

If we could eliminate humans from our facilities, infrastructure would become more reliable and more efficient. We could raise operating temperatures from the recommended range of around 20°C to 25°C (68-77°F) all the way up to 45°C (113°F), resulting in considerable savings on cooling costs. Several vendors have previously confirmed that their hardware can take this kind of harsh treatment. We wouldn’t have to care about air quality or humidity, or even keep the lights on.

Most importantly, we would eliminate human error – one of the main reasons for unplanned downtime. According to research by the Ponemon Institute, 22 percent of all data center outages in 2016 were caused by people, not hardware.

There are plenty of organizations that are taking important steps towards automating their infrastructure. For example, Microsoft Research continues its work on Project Natick, sinking autonomous data centers to the bottom of the ocean. AOL claims to have operated a ‘lights out’ data center called ATC since 2011, but details about the facility are few and far between.

Both IBM and EMC previously equipped iRobot’s Roomba – the autonomous vacuum cleaner - with temperature sensors in order to build heat maps of their server farms, representing one of the early uses of actual robots in a data center.

Sony’s Everspan Library System is another example of data center robotics: this modular appliance holds thousands of high capacity Archival Discs that are managed by an automatic arm, like a futuristic jukebox. Meanwhile American startup called Wave2Wave has developed Rome, a series of switches that enable physical fiber connections to be made automatically.

Software automation driven by tools like Chef and Puppet and trends like SDN are also doing their part to help minimize the need to interact with actual hardware.

And there’s no reason why we couldn’t completely eliminate people from the equation: after all, a data center is nothing but a warehouse full of servers, and warehouse automation is something that is being actively investigated by several retail giants, with Amazon emerging as one of the leaders in this field. We will always need people to look after the infrastructure, but soon, a time will come when we no longer need to share the same space.

This opinion originally appeared in the April / May edition of the DCD Magazine.