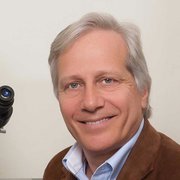 Alex Lidow is CEO and co-founder of Efficient Power Conversion

Space on a server board is extremely precious, and servers – especially those designed for performing high-end computation functions such as artificial intelligence (AI) – are demanding more and more power. Simultaneously, GPUs are becoming quite common in AI systems. These GPUs are putting additional demands on power conversion requirements, where voltages as low as 0.6 V are required under certain operating conditions. Requirements now routinely top 3 kW per board with several systems requiring as much as 5 kW.

These stringent power requirements have necessitated changes in basic power conversion architecture. First, with board space at a premium, high power density architectures become the holy grail for power systems designers. eGaN FETs have been in production for 12 years, and the 5th generation devices have pushed the upper bounds of power density by almost a factor eight in the past six years as illustrated in figure 1.

Advances in GaN technology, coupled with improvements in magnetics and thermal management, enabled this acceleration. The layout and physical architecture of the latest version of a 48 – 12 V unregulated DC-DC converter is shown in figure 2. The use of all three dimensions to locate the transformer on top of the active circuit saves space as well as reduces resistive losses.

The next step for increasing power density is to incorporate recent advances using GaN to integrate additional circuit functions on a single chip. Shown in figure 3 is the EPC2152 monolithic power stage. On this single GaN-on-Si chip are integrated two power transistors, two drivers, a level shift circuit, a bootstrap circuit, and input logic. This GaN IC replaces three components and, by virtue of the higher performance realized through integration, cuts the board space needed for these functions by 35 percent.

This GaN IC technology can be used to further increase power density by another 50 percent. A conceptual illustration of the improvement resulting from integrated ICs is shown in figure 4.

Fans can operate more efficiently at 48 V than at 12 V and can therefore benefit from GaN IC-based motor controls.

GaN-on-Si integrated circuit technology is in its infancy. Improvements in performance, cost, as well as features and functions, are being introduced almost monthly. Figure 6 shows key topology milestones in GaN integration starting with the first monolithic half-bridge devices introduced in 2014. In 2022, expect multistage ICs, followed by power-plus-control systems on a single chip in 2024. 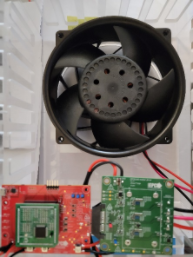 The conversion to 48 V on the server board has driven GaN-on-Si transistors into high-volume, low-cost production. Prices for GaN transistors are consistently lower than Si MOSFETs. This lower cost, coupled with the higher performance and smaller size, make GaN the compelling choice for 48 V DC-DC converters and BLDC motors used in servers.

These same elements of value – higher performance, smaller size, and lower cost – are pulling GaN ICs into 48 V DC-DC converters used in automotive applications. As fuel efficiency standards increase, a significant shift is occurring, with electric and mild hybrid vehicles adding 48 V batteries and requiring 48 – 12 V bi-directional converters. GaN transistors and IC are already populating these new systems and will certainly be the component of choice over time.

Figure 6: GaN integration milestones. Multistage ICs will be available in 2021, power-plus-control systems on a single chip in 2024 – Efficient Power Conversion