Drones get their own data center

Drone technology will have an impact on data centers - and the rest of our lives.

My first association with drones is a remote-controlled toy: a helicopter with multiple rotors, that carries a camera, and can be used for stunts like fishing or delivering beer.

Like the 3D printer, It’s been an oversold consumer device, and like the 3D printer we can expect it to settle into dull applications any day now. There will be drones for building security patrols, drones for farmers to survey their crops, and stuff like that. 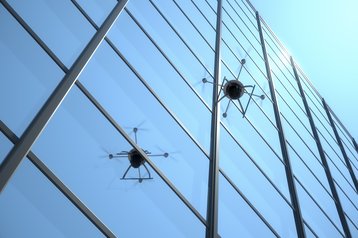 Many of these applications will benefit the environment. Drones will help protect rare species from predators, and monitor pollution. They will carry out jobs including light deliveries, which would previously have needed heavy engineering and/or fossil fuels, using only a modicum of stored electrical power.

But there’s more to it. Drones have a future role in the internet of things (IoT), with huge implications for efficiency… and also for privacy. And their first and greatest role is still the unmanned surveillance and assassination devices used by the military.

Both these faces of drones have a great hunger for data and processing. So it’s no surprise to hear of a specialist drone data center, being built in the heart of the military-industrial drone complex.

Ultimately, drone data isn’t different from any other data. It won’t require a dedicated data center because, the work will be done better and more efficiently in the cloud.

EdgeData is building a $10 million data center for Grand Sky, a tech park built on the Grand Forks US Air Force Base in South Dakota. Grand Forks is a giant airfield, that has no manned aircrat. It has specialized in drones for ten years, with ground-based technicians flying foreign missions using General Atomics’ Predator and Reaper drones, 60-ft planes bristling with weapons.

Or drones for war?

North Dakota sees a commercial spin-off coming, and has given its financial backing to Grand Sky, hoping it will become a Silicon Valley of drones, where commercial firms will develop civilian applications for the technology. Despite this, it’s starting out with a decidedly military slant: the first tenants are General Atomics and Northrop Grumman, maker of the 130-ft Global Hawk.

Why the data center? Working for the military, and civilian IoT projects, drones will gather enormous quantities of data, which will need storage, classifying and processing. EdgeData, the company involved, has a track record of analysing engineering data, so there is a logic to this.

Ultimately, of course, drone data isn’t that different from any other data. It won’t require a dedicated data center because, like everything else, this work will be done better and more efficiently in the cloud.

But for now, a specialized site makes sense. And the location, on the edge of a military base, is an exact match for the ambiguous role of drones in the wider world.