Corrosion - a clear and present danger 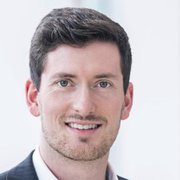 Tobias Wolf is deputy head of product management at Stulz

Part 1 of 2: causes and consequences of corrosion

Data center free cooling system components such as air to water heat exchangers are subject to the risk of corrosion, which can lead to significant efficiency and availability issues.

Free cooling is now considered one of the most highly effective ways to reduce the energy consumed by chillers. These systems can save data center owners and operators massive amounts of electricity and money, and significantly improve a facility’s overall Power Usage Effectiveness (PUE) rating. However, the air to water heat exchangers that are an integral part of a free cooling system are subject to corrosion, which should be avoided.

Corrosion is defined as the reaction of a metal with its environment. It’s a gradual process which, over time, can lead to the impaired functionality of an individual component or even a complete system. Even though corrosion occurs everywhere in principle, certain environmental conditions can drastically accelerate the erosion process. 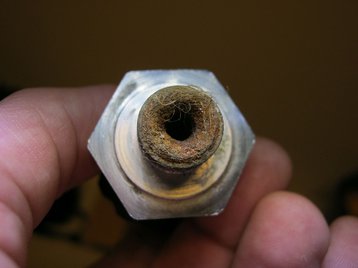 Corrosive processes are triggered by chemical or electrochemical substances in the ambient air, or by contact between two different metals. Under particularly harsh conditions, air to water heat exchangers can be damaged to such an extent that they become deformed or experience the breakage of their individual fins, while airflow blockages can reduce the operational effectives of an entire system. Any damage to the material structure that occurs is often irreversible and requires expensive repairs or even replacement.

In air conditioning based systems installed outside, oxygen and acid corrosion are relatively common. Oxygen corrosion is caused by a metal reacting with oxygen to form oxides. In the case of copper and aluminum, the resulting natural oxide layer protects the interior of the metal, so oxidation can even be considered beneficial but this is the exception rather than the rule. Acid corrosion, however, is far more aggressive than the processes relating to oxygen corrosion.

At locations with high industrial pollution, any emissions can significantly accelerate the corrosion rate, with compounds such as nitrogen and sulfur oxides, as well as ammonia, chlorides and carbon monoxide, reacting with copper and aluminum to form acids that can cause microscopic indentations. Known as pitting, this can cause severe damage within just a few months. The greatest risk factors for accelerated corrosive erosion are found at locations with heavy industry, high traffic density or which are in the direct vicinity of agricultural land.

As soon as more than one metal is used in an air conditioning component, galvanic corrosion can happen. It occurs when two (or more) dissimilar metals are brought into electrical contact under water. In conjunction with an electrolyte such as salt water, ions of a less noble metal begin to flow towards a more noble metal. The less noble metal gives up electrons and is oxidized, with steady decomposition of the material. Copper and aluminum components are particularly affected by this, as are metal combinations in environments with high saltwater contamination. 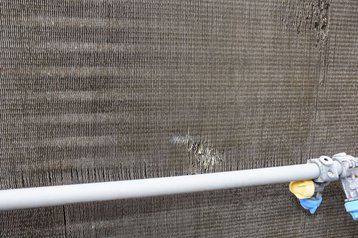 Galvanic corrosion can cause significant damage to aluminum microchannel heat exchangers that are connected via copper tubes. The fracture and blockage of the fine microchannels can then lead to partial pressure losses or even refrigerant leakage. Other factors, such as the use of low grade metals, further increase the risk of corrosion, while cracks and holes in the surface can also allow more water to accumulate, accelerating decomposition. In general, a warm, humid climate and frequent temperature fluctuations increases the overall risk of corrosion.

Both variants require an oxygen-tight water circuit free of foreign particles and sedimenting substances. In the closed circuits found in chilled and cooling water systems, corrosion damage can occur in as little as a couple of years. This is a problem not only because of possible pipe damage and leaks, but also because flaked off corrosion particles can clog pumps, filters or capillaries.

Other factors also contribute to the corrosiveness of circulating water including pH value, water hardness and conductivity. Water hardness is defined by the content of alkaline earth metal ions. On the one hand, there is carbonate hardness, which is also called temporary hardness, and on the other there is permanent hardness. Non-permanent hydrogen carbonates, which are dissolved in water when a circuit is filled, create precipitates and carbon dioxide, leading to carbonates locating at the warm sections of a circuit and causing efficiency losses. 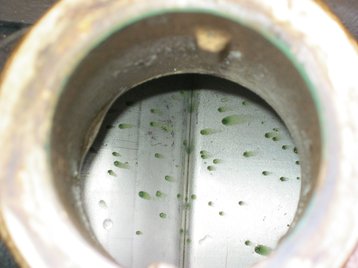 Formation of a biofilm due to bacterial corrosion on a pump, due to the use of deionized water without additives – Stulz

The quality of the water in the circuit is a key factor, since the direct risk of corrosion damage rises and falls with it. If there is high oxygen content in the water, an enhanced risk of corrosion can also be assumed, but in closed systems this is rapidly degraded. However, there are a number of different types of corrosion that can occur in this type of circuit.

In closed systems oxygen decomposes over time, but a residual oxygen content can generally be assumed. If oxygen, water and a metal react with each other, oxidation or corrosion of the metal occurs. In the case of acid corrosion, metals are attacked by acid due to a pH value that is too low (<5pH) and this begins a decomposition process. The reaction can take place without oxygen and proceeds more aggressively in a more acidic environment. There is also the risk of bacterial corrosion, where bacteria extract electrons from the metal and oxidizes. The waste product of the bacteria is sulfur oxide, which causes a strong odour in the surrounding medium.

When it comes to data center operation, even minimal disruption can have expensive consequences. Corrosion poses a serious risk to uptime and understanding the various protection measures for outdoor air exposed heat exchangers, as well as the processes that take place in a chilled and cooling water circuit, serve as the basis for a proactive maintenance strategy.

Read Part 2: how to protect components against corrosion, and reduce the risk of failure.