As the United Kingdom goes to the polls, we hear news of energy efficient sites in England, Scotland, Wales - and Ireland too

This week Britain goes to the polls to elect a new government - and technology hasn’t had much of a look in. The arguments have been all about the economy, public services, and the level of autonomy for Scotland and Wales (and chuntering about Europe from the increasingly bonkers folk of UKIP).

There are tech issues, of course, and last year saw a couple of efforts to engage the industry. In June 2014, MPS from the major parties all signed up to a Technology Manifesto from Policy Exchange. In September, industry body TechUK issued its own TechUK Manifesto. But in the electrion itself, these manifestos disappeared, and we heard almost nothing about technology.

The reason for that is pretty obvious: elections are about arguing. Few politicians understand technology, and those that do tend to agree about it (UKIP is an outlier, of course. Amongst its amorphous policies it has tended to deny global warming, but its one fixed point is to oppose immigration, while the technology industry is crying out for rules that will allow British-trained foreign nationals to stay and contribute to the country’s industry). 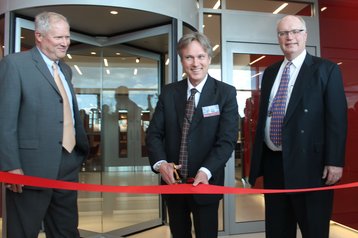 Get back to the lab

So, during the election campaign we’ve not heard much from politicians, but we’ve heard of efficient data centers jumping political hurdles in every corner of Great Britain - and our neighbour Ireland.

The Conservative member for Crawley, Henry Smith, took time to open Rackspace’s new data center in Crawley. Smith is sitting on a comfortable majority, but he did claim that he fully understood the PUE (power usage effectiveness) metric - which is more than some people in the industry can claim.

If Smith isn’t re-elected, he joked, he will apply for a job at Rackspace.

The site has been built by Rackspace and Digital Realty, who claim it is the first large data center in the UK to be built with no mechanical chillers. It’s currently a 6MW site, but has two empty halls that could take it to 12MW.

“Free cooling” is practical in more countries than ever before, as the current ASHRAE guidelines allow for higher temperatures. Leaving out the aircon unit saves on capex, but it’s a step of faith - and most sites have conventional coolers on hand for reliability.

Rackspace found the space saved was also significant. Indirect free cooling units from UK specialist Excool can fit on the roof, along with UPS systems and power distribution.

Power and cool air are distributed straight down to the IT halls, where contained hot aisles are at 36 degrees C, and the ambient temperature is 24C. Overall, the site has a planned PUE (power usage effectiveness) of 1.15. 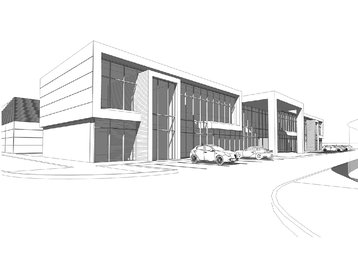 Whoever gets in, we’ll get on

It’s also - we learnt from the proposal last year - powered by local renewable energy. The 8MW site will run on bio-gas produced from the waste made by a giant paper mill, processed at a 65MW combined heat and power plant.

In Wales, Next Generation Data (NGD) announced it will spend £8 million ($12.5m) to extend within its beautiful Newport site - which has an interesting political history, as it originally had government support as an electronics  factory for LG, who moved out.

NGD has been on 100 percent renewable energy for five years: in Wales it gets is close to the UK’s largest hydroelectric power station - the 1.7GW monster at Dynorwig.

Finally, what about the UK’s neighbor in the British Isles? Over on the West side of Ireland, Apple revealed a little more about its plans for an €850 million data center in Galway. It’s filed a planning application for the site - and then issued a request for proposals to provide renewable energy to power it, which could add  €400 million to the deal.

As you would expect politicians are welcoming the Apple data center - but it seems Galway has one of those polticians with a commendable level of technical knowledge. Aware that data center heat can be re-used, Senator Fidelma Healy Eames asked if Apple could provide a public swimming pool heated by its servers.

The request was refused. The Galway sites proposed sister project in Denmark will be re-using the heat of its proposed site, but that is because the Danes have district heating infrastructure in place. In Ireland, Apple would have to put in the capital for such a scheme - and that’s not on the table.

When Britain wakes up on Thursday to a new government, we can hope for more tech savvy amongst our leaders. We’ll probably have to settle for tech leaders with enough political nous to work with whatever politicians we end up with.