Apple wants to sell (some) energy

It’s good accounting, not a giant leap for mankind

Whatever Apple does is treated as something amazing. Even if it’s utterly mundane. Take the reactions to Apple’s announcement that it will become an energy supplier. It’s been hailed as a welcome source of income for Apple, and a stabilizer to the company’s fluctuating stock valuation.

In fact, it’s just some sensible accounting. Google did the same thing five years ago, and is likely to sell more power than Apple. But it won’t make a huge financial difference to either company. 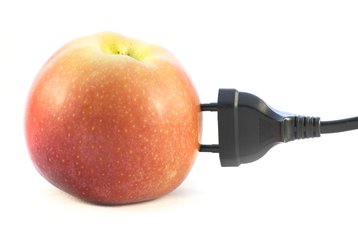 Apple has set up a subsidiary, Apple Energy, to sell surplus energy generated by its renewable power projects, including solar panels on the roof of its new Cupertino headquarters. The company has applied for permission from the US Federal Electricity Regulatory Commission (FERC), to sell energy generated by 90MW of solar capacity it owns, and power produced through a power purchase agreement (PPA) with a 130MW California solar farm.

Apple is not asking FERC for permission to sell electricity to consumers. It wants to sell it on the wholesale markets, but at the normal wholesale price instead of the price it currently gets which is set by the local utilities.

If it gets permission, Apple will get more money from its spare electricity. But it’s not a huge money-spinner. It’s just Apple getting a better return on its renewable investment.

Apple pays to generate a fair amount of solar power around the world and, like other cloud players, sponsors renewable energy generated by utilities, so that its overall operations are carbon neutral. As we have noted before, solar and wind power deliver a fluctuating amount of power, so Apple sometimes buys in more than its projects produce, and sometimes sells a surplus. Approval from FERC would mean Apple can get more money when its solar farms generate more power than its data centers actually need.

Google has had a similar deal in place for five years, and buys and generates more renewable energy than Apple, both directly and through PPAs. It’s not making a major profit center from renewable energy. Google used to have a research project, RE<C, working on new renewable energy sources, but wound it up in 2011. Since then it’s concentrated more on PPAs than running its own generating capacity - like all big cloud companies.

Some commentators have concluded that Apple wants the revenue from its renewable energy to smooth any bumps in its income: “Apple’s business is extremely cyclical,” says a blog on theStreet. “A dynamite new product is released and Apple’s shares skyrocket…. Then sales growth slows as the product becomes old news.”

Revenue from Apple Energy “could provide some nice extra padding to Apple’s bottom line, on top of keeping consumers - and investors and analysts - interested in Apple’s diverse products.”

Sorry, but that’s not realistic. The cost of electricity in the US varies a lot and is tied closely to local natural gas prices (as so much of it is generated from gas). But $50 per MegaWatt hour (MWh) is a generous figure.  How many MWh will Apple be able to sell? The total capacity covered is 220MW, but that’s the peak capacity, and solar plants don’t work at night. Let’s cut that in half, and say Apple can sell 110MW. That’s ludicrous as it’s pretty much all the energy it will get from those plants, and the whole point of them is to use some power in its own data centers.

How much extra money will Apple get for the power it sells? I don’t know, it’s the difference between the market rate and its local partner’s rate. It’s probably less than $10. So on this huge overestimate, Apple still gets less than $10 milllion, which sounds a lot. But it is less than 0.02 percent of the company’s $53 billion in annual revenue.

No tech company is ever going to make more selling electricity than it would using that electricity in house to make more products and services. Electricity is a raw material for a tech firm. You might as well suggest that Intel could raise significant money by selling spare sand left over by its silicon fabs.