A year of change for Huawei's British ties

The champagne is still flowing, but some people are drinking for different reasons

A lot can change in a year. Last year’s Huawei Summer Reception in London was jubilant. This year things were different.

At the 2016 reception in Banqueting House, Whitehall, Huawei was ascendant, the UK was one of the fastest growing economies in Europe, and the partnership between Britain and China was strengthening daily. Just a few weeks later, things started to go south.

When DCD attended the 2016 reception the relationship between East and West was repeatedly highlighted. The two worlds were united, and the attending partners, government officials and customers were eager to embrace what this alliance could mean.

As a musician played gentle music on a gilded harp, a giant screen displayed images of Huawei CEOs walking with Prime Minister David Cameron and Chancellor George Osborne. As the screen softly faded from one still of smiles and handshakes to the next, guests mingled with glee.

The architect of Britain’s close ties with China was Osborne, who set to work on improving the relationship after Cameron met the Dalai Lama in 2012, sparking protest in Beijing. A controversial politician, Osborne’s world view was that China was the future and that the sooner a country accepted that fact, the better the outcome.

“Let’s stick together and make a golden decade for both our countries,” Osborne said on a visit to Beijing in 2015, adding that he wanted China to become the UK’s second-largest trading partner by the end of the decade.

But ‘The Osborne Doctrine,’ as some have dubbed it, was not embraced by all. Jonathan Fenby, former editor of the Observer and author of several books on China, told the BBC: “My unease about this policy is that in the end the British government is putting what it sees as an important national interest here, in terms of infrastructure and development, at the mercy of a regime in Beijing which we don’t understand too well, which certainly we can’t control and even whether we can influence it is another nice question.”

In China, government and business leaders talked about the UK’s openness to Chinese investment, even in areas of critical infrastructure, something that China’s ambassador to the UK admitted might be “unthinkable” in other countries.

This of course was good for Huawei, whose participation in national infrastructure projects in the US and Australia has been limited by apparent security concerns.

In the US, a 2012 House of Representatives report claimed investigators received “internal Huawei documentation from former Huawei employees showing that Huawei provides special network services to an entity the employee believes to be an elite cyber-warfare unit within the [People’s Liberation Army].”

While the US and Australia banned Huawei from bidding on most critical infrastructure projects, Britain took a different approach - accepting Huawei into the fold. In Banbury, Oxfordshire an office block known as ’The Cell’ checks Huawei gear and code for security holes - accidental, or otherwise. It is staffed by Huawei employees.

In 2013, Parliament’s intelligence and security committee - at the time chaired by former defense secretary Sir Malcolm Rifkind - criticized The Cell, claiming that Huawei’s people were “effectively policing themselves.” Changes were made, with GCHQ staff and government officials, as well as representatives of Vodafone, Huawei and BT, brought together to create an oversight board chaired by Ciaran Martin, director general for cybersecurity at GCHQ.

Ernst & Young, who audited whether the Cell is indeed independent, pointed out continuing issues, including the fact that Huawei controls the bonus of the Cell’s managing director.

But despite these concerns, it was this world - of GCHQ and Huawei working side by side, of Osborne and Huawei founder Ren Zhengfei walking together in a park, of huge swaths of the nation’s infrastructure sporting a red flower - that the Summer Reception was there to celebrate.

Representatives from Huawei, including executive director of the board William Xu and Lord Browne, chairman of Huawei UK, as well as government figures including culture, media and sport (DCMS) minister Ed Vaizey spoke warmly of the special relationship enjoyed by the two countries.

Then Britain voted to leave the European Union.

Suddenly, David Cameron was gone, George Osborne was gone and Ed Vaizey was gone (for more on his fall, see the factfile below).

Then Theresa May - someone who opposed the Chinese involvement in Hinkley Point C and, according to former business secretary Sir Vince Cable, had a “general prejudice” against Chinese investment - became the UK’s leader. Cable told The Telegraph that she was “never completely satisfied about Huawei” and that “she has expressed in several different contexts severe reservations about China getting too close to the UK.” 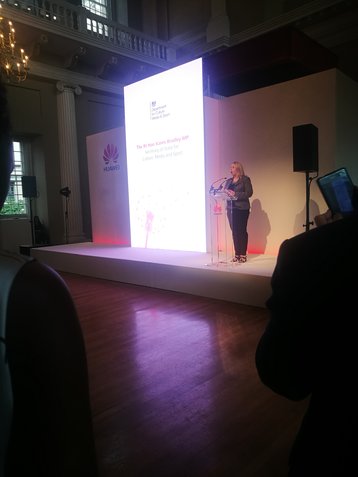 Against this backdrop of renewed tensions Huawei held its 2017 summer ball, delayed a few weeks to avoid the General Election that made Britain’s status and outlook all the more confusing.

The golden harp and the huge Huawei logos were back, and the Banqueting House venue, next door to the Ministry of Defence, was the same. But the slideshow romance was gone.

The great relationship was no longer so prominent, and the new DCMS minister Karen Bradley admitted she had only recently become aware of the annual reception.

In 2016, Vaizey spent his time talking to the audience about Huawei. In 2017, Bradley was there to talk to Huawei in front of an audience.

“The UK government is absolutely committed to working with Huawei, you are a great partner to us, you contribute an immense amount to our economy and our culture,” she said.

“We will work with you, we will make sure we have a great partnership and that you can bring so much to the British economy and the British way of life.”

But the mood from some in the room is that commitment is far from certain. While on the one hand, Britain arguably needs all the friends it can get, with an economy slowing and a looming future bereft of the EU’s embrace, the country - and Huawei - is in uncharted waters. There are new faces in the halls of Westminster, and not all of them look so kindly upon Chinese corporations.

Perhaps there is currently some common ground between Huawei and the British government. After the results of the general election, Huawei’s custom to rotate its CEOs seems like an idea many in the Conservative Party can get behind.

In 2016, the UK voted narrowly to leave the European Union. Surprised by the result, Prime Minister David Cameron resigned and Theresa May assumed leadership of the Conservative party after a short contest. A number of cabinet ministers lost their jobs, and Vaizey knew he was on the chopping block.

He was travelling through the countryside when he received a call informing him that he was about to receive a call from 10 Downing Street. That’s what happens when the Prime Minister calls you, apparently.

Vaizey knew what this call would be about but, as luck have it, he was in an area which had no cellular signal. This was despite continuous promises that his department would improve mobile coverage. He continued to have issues with connectivity and struggled to take May’s call.

So in a way, the minister responsible for telecommunications couldn’t even get fired properly because he had done such a bad job.