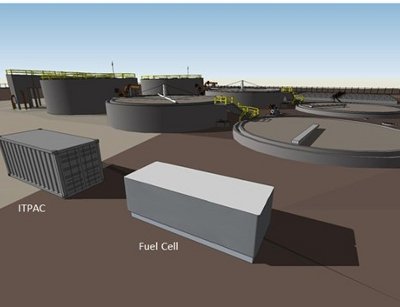 A state economic-development agency in Wyoming has approved a US$1.5m grant to help the City of Cheyenne build infrastructure for an experimental project by Microsoft designed to test whether a data center can run completely off the electrical grid, using instead electricity generated by converting methane produced by a wastewater treatment plant.

The plan – if it goes forward – is to install a Microsoft data center module called ITPAC and a fuel cell at the site of the city’s Dry Creek Water Reclamation Facility, according to documents filed with the Wyoming Business Council. The fuel cell will convert biogas generated as byproduct of the water treatment process – called anaerobic biodigestion – into electricity to power the data center.

Microsoft’s goal is to prove that biogas generated by processing waste can power a data center. Christian Belady, GM of data center services at Microsoft, called this concept the “Data Plant” in a blog post he wrote to describe it in April.

The concept is an attempt to make data center infrastructure less reliant on the volatile electrical grid and to make data storage, processing and transfer more environmentally friendly than powering data centers with electricity generated by coal power plants.

The city will use the state grant to build an additional anaerobic biodigester at the plant, which facilitates the breakdown of biodegradable material by microorganisms, gas-fuel treatment infrastructure, fiber-optic cabling and other equipment necessary to connect the data center and its fuel cell to the plant. Microsoft will lease this infrastructure from the city.

A Danbury, Connecticut-based company called FuelCell Energy will provide the fuel cell for the experiment, expected to last 18 months. Once this period is over, depending on the results, the fuel cell and the data center and the fuel cell may stay in place for further demonstrations or removed.

Microsoft will work with the University of Wyoming to conduct research at the data center. The Western Research Institute will also be involved to provide technical services during construction and operation of the experimental facility.