Queensway Park data center is on its way

Construction work has begun on a £150 million data center in Fife, Scotland, which will be run entirely on electricity generated from biomass.

The Queensway Park campus was granted planning approval in April 2015. This week work started on a facility which aims to be the largest and greenest colocation site in Scotland. The 20MW facility will be built in the redundant Tullis Russell paper mill, and powered by Britain’s largest biomass generation plant. 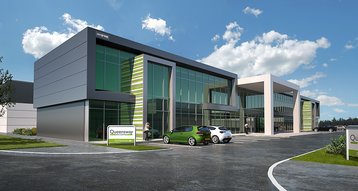 Queensway Park Data Centers is building a two-building campus at the site in Glenrothes, one hour’s drive from Edinburgh in an area once known as Silicon Glen. The company is is a joint venture between two commercial property developers - County Properties Group and AOC.

The site is powered by the recently built RWE Markinch Biomass Combined Heat and Power (CHP) plant, which runs on wood waste from a nearby paper mill. The plant in Markinch is the largest of its kind in the UK, capable of producing up to 65MW of electricity. Meanwhile excess heat from the data center itself will be used to heat adjoining offices.

QPDC says it will employ 300 people during the build and there will be 50 full time jobs at the site after completion.