Offers maximum capacity for any kind of workload

The Ultrastar He10 is filled with Helium and has seven platters, but is otherwise a traditional drive that spins at 7200 RPM.

Western Digital’s main competitor Seagate is yet to release a 10TB drive, something it previously said would happen before the end of the year. 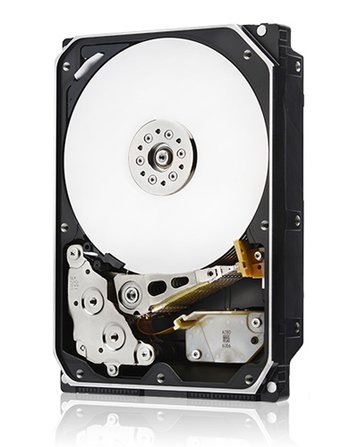 In June, Western Digital subsidiary HGST rolled out the world’s first 10TB drive, the Ultrastar Archive Ha10. It is filled with Helium and reaches high capacity using SMR - a technique that overlaps or ‘shingles’ the neighboring magnetic tracks on top of each other.

SMR helps squeeze more data onto a single platter, but has a negative effect on performance, since any information written to disk must be first rearranged in a sequence.

In addition, the Ultrastar Archive Ha10 is a ‘host-managed’ drive– something that makes matters more complicated, since the drive doesn’t possess enough intelligence to arrange the data and has to rely on server-side software.

The drive is intended as a straight-up replacement for current storage hardware, and promises similar performance characteristics. As an added bonus, being filled with Helium cuts the electricity consumption of a drive in half, since the light, inert gas makes it easier to spin the platters.

“Netflix has built an industry-leading Content Delivery Network and these 10TB drives will allow us to quickly integrate, build more capacity and stream more movies to our consumers,” said David Fullagar, director of content delivery architecture at Netflix.

“We’ve been using the HGST HelioSeal drives for a long time and not only do they give us more capacity, they have contributed to a lower overall power envelope and higher storage density, which has allowed us to maximize our data footprint and create a network that is optimized for TCO.”

When WD launched HelioSeal in 2013, many questioned the reliability of hermetically sealed drives, and whether the casing could keep the tiny Helium molecules in place for the lifetime of the device.

Now the drives have seen plenty of use in the enterprise, and WD claims Helium makes them more, not less reliable. The Ultrastar He10 is rated for 2.5 million hours Mean-Time-Between-Failures (MTBF) and protected by a five-year warranty. Compare this with Seagate’s Enterprise NAS drives, which are rated at just 1.2 million hours MTBF.

“Our HelioSeal platform has defied next-generation expectations around capacity, reliability and power in HDDs,” said Brendan Collins, vice president of product marketing at HGST. “We were the first to recognize the benefits of Helium and have pushed the boundaries while others are scrambling to catch up.”

Seagate is obviously lagging behind in the race for greater capacity, but don’t be quick to write the company off. Instead of Helium, it is betting on another technology – Heat-Assisted Magnetic Recording, or HAMR.

HAMR places a tiny laser on the read/write head of the drive to heat up the platter before any data is written on it, in order to keep the magnetic tracks as narrow as possible. Seagate has successfully demonstrated working HAMR drives, and they are set to appear on the market in 2016.

Western Digital is developing its own version of HAMR, so the competition will only intensify.