Western Digital has created the world’s first 14TB hard drive, the Ultrastar Hs14, filled with Helium and relying on a technique called Shingle Magnetic Recording (SMR) to boost capacity at the expense of write speed.

By increasing capacity while keeping the familiar 3.5-inch form-factor, the company has also lowered the power consumption per TB, making the new drive more power efficient.

Ultrastar Hs14 is being positioned as a suitable device for hyperscale and cloud environments, and is currently sampling with select OEMs. 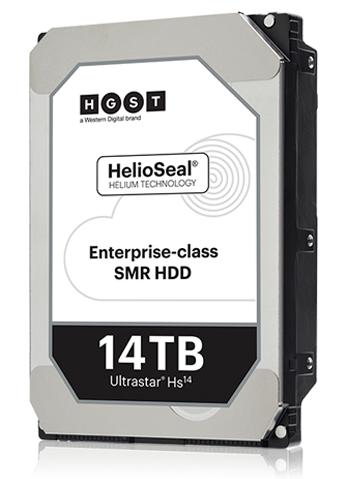 The Ultrastar Hs14 brings together several innovations that have enabled hard drives to keep increasing capacity.

HGST, a brand of Western Digital, was the first to fill drives with Helium at the end of 2013 – an approach that proved successful and has since been replicated by WD’s main competitor Seagate.

Helium has less resistance than air: this simple property enables helium-filled hard drives to have reduced power requirements, weight, disk vibration, mechanical wear and drive temperature. The main challenge with this approach is keeping the gas sealed within the enclosure for the lifetime of the drive.

“Over 70 percent of the exabytes Western Digital ships into the capacity enterprise segment are on helium-based high capacity drives and continue to support customers with outstanding reliability, performance and value Quality of Service (QoS),” said Mark Grace, senior vice president of devices at Western Digital.

“The TCO and reliability benefits of our HelioSeal platform is the foundation of our leadership in high capacity enterprise storage.”

The Ultrastar Hs14 also features second generation SMR - a technique that overlaps the neighboring magnetic tracks on top of each other, like shingles on a rooftop. SMR helps squeeze more data onto a single platter, but has a negative effect on performance, since any information written to disk must be first rearranged in a sequence.

Western Digital says it has managed to offset some of the drawbacks of SMR, and the drive offers more than twice the sequential write performance of its predecessor, making it suitable for tasks like backup and archiving.

However, SMR functionality still needs to be managed by the host – the storage server – requiring specialized hardware, which means the new drives cannot be used as drop-in replacements for traditional capacity enterprise drives.