The device, called Ultrastar DC HC620, is filled with helium instead of air, and uses Shingle Magnetic Recording (SMR) - a method of storing information that boosts capacity at the expense of write speed. These features make it especially suitable for cloud and enterprise data centers.

Since the drive is ‘host-managed,’ it cannot serve as a drop-in replacement for traditional storage drives – customers will need to modify their applications and/or operating system to support SMR functionality. 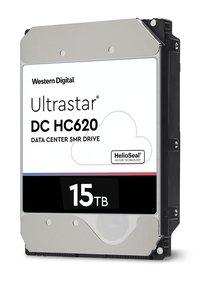 Doubling down on SMR

SMR is a technique that overlaps the neighboring magnetic tracks on top of each other, like shingles on a rooftop (see image). It helps squeeze more data onto a single drive platter, but has a negative effect on performance, since any information written to disk must be first rearranged in a sequence.

This means SMR is most suitable for ‘cold’ data that is generally written once, and rarely updated. As an example, SMR drives can be used to archive information that needs to be stored for regulatory purposes, or video surveillance libraries.

Western Digital says that its second generation SMR drives enable data center customers to accommodate up to 900TB of capacity in a single 4U enclosure.

“With data continuing to grow at unprecedented rates, many hyperscale and cloud storage customers know that their workloads trend toward data that is written sequentially. In these instances, customers are optimizing their infrastructures with the lowest TCO and the maximum capacity,” said Eyal Bek, vice president of product marketing at Western Digital.

“By capitalizing on our highest-capacity SMR storage solutions, our customers’ investment can not only be fully leveraged today, but for subsequent generations of SMR areal density improvements for continued infrastructure optimization.”

The drive also benefits from the advantages of Helium: the inert gas offers less resistance than air, and this simple property enables helium-filled hard drives to have reduced power requirements, weight, disk vibration, mechanical wear and drive temperature. The main challenge with this approach is keeping the gas sealed within the enclosure for the lifetime of the drive –something WD is achieving using proprietary HelioSeal technology.

The Ultrastar DC HC620 is already shipping to select customers, and will reach general availability later this quarter.