The US, UK, European Union, and Canada agreed to cut off some Russian banks from the main international payment system, SWIFT.

The 'Society for Worldwide Interbank Financial Telecommunication' is a Belgian-based service that acts as the main messaging network through which international payments are initiated.

Around 11,000 banks from over 200 countries are connected to the system, making it an integral part of the modern financial system.

The West will also freeze the assets of Russia's central bank, limiting its access to overseas reserves. 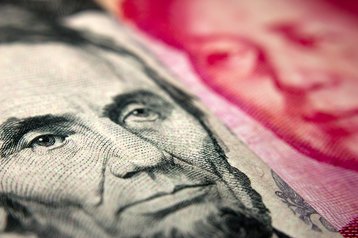 SWIFT runs its network out of three data centers - one in Zoeterwoude, Netherlands; another in Culpeper, Virginia, United States; and a third in Diessenhofen, Switzerland. It also has a Command and Control center in Hong Kong.

The US used to be able to use terrorism legislation to gain access to any transaction data stored by SWIFT.

But in 2010, the group stopped storing European user data outside of the Holland and Swiss facilities, meaning that the US would have to ask the EU for data.

In 2013, whistleblower Edward Snowden revealed that the US National Security Agency had instead hacked the SWIFT network in Europe to continue to get access to the data.

Cutting a nation off from SWIFT is a significant move that can isolate it from the modern financial system. Iran was disconnected in 2012, forcing it to rely on pallets of cash to fund its government.

Some European nations considered kicking Russia out of Swift following its 2014 invasion of Crimea, something that Russia said would be seen as a declaration of war.

"I wouldn’t want to keep money in a bank that can’t access the SWIFT system," billionaire American investor and hedge fund manager Bill Ackman said on Twitter. "Once a bank can’t transfer or receive funds from other banks, its solvency can be at risk. If I were Russian, I would take my money out now. Bank runs could begin in Russia on Monday."