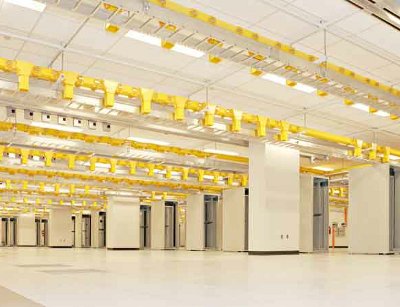 Conan Lee, senior VP at Jones Lang LaSalle (JLL), said the data center would be a good fit for a cloud-computing company or a large enterprise user. The state has retained JLL, a real-estate services firm, to lease out the space.

“It’s completely built-out and ready to go,” Lee said about the data center. “The State of Washington has hired third-party contractors that are going to manage the data center at the back of the house.”

The tenant (or multiple tenants) that ends up moving into the facility will share power and cooling infrastructure with the state. Sally Alhadeff, IT facilities program coordinator with the state, said IT systems supporting government agencies were occupying one of the two data halls in the facility.

“The state is in the process of completing its IT infrastructure now,” Alhadeff wrote in an email.

In leasing the second data hall reserved for an outside tenant, the state faces some tough competition in the Pacific Northwest’s data center market, which includes both Washington and Oregon states. There are major chunks of data center capacity currently available from commercial wholesale providers in Tukwila, Quincy, Bothell and Wenatchee (all in Washington), as well as in Hillsboro, Oregon, according to a presentation Lee gave at a recent industry event.

But, the region has no shortage of major end users that already have data centers there. This list includes Facebook, Google, Amazon, VMware, T-Mobile, Yahoo!, Microsoft and Intuit, and these are exactly the kinds of end users Lee would like to see take space at the government’s new data center.

The state’s pitch against its private-sector competition includes, among other points, 100% free cooling through airside economization, capacity that is built out and ready to go, high power density (175 watts per square foot), good fiber availability, a facility purpose-built to be a data center and low lease rates.

“It’s priced lower than all of our competitors,” Lee said.

Washington State is offering 13,000 sq ft of space and a total of 2.25MW of critical power capacity in the data hall for prospective tenants who would be sharing the facility, located near the state capitol, with government agencies.

There is also 30,000 sq ft of “shell” space, or space without raised floor that is available for future expansion, according to a website set up to market the data center.

The data hall occupied by the state measures about 15,000 sq ft and has a similar critical-power capacity (2.25MW) to the other hall, Alhadeff wrote.

The state will be managing the facility overall, but has contracted support and maintenance of electrical and mechanical systems out to McKinstry.