Output of 5.5MW to 10MW, and a fast response makes it suitable for on-site generation or backup 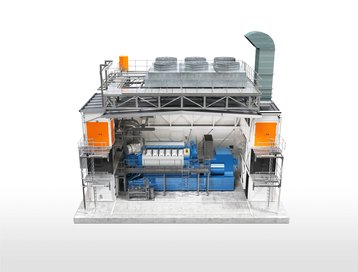 Finland-based Wärtsilä specializes in gas-fired generators, which have traditionally had limited applications in data centers, as most gas engine generators don't start up quickly enough for backup, and gas is harder to store on-site. This is changing for two reason, according to Juha Kerttula, senior application manager at Wärtsilä.

Until recently, gas engines took ten minutes to start, but this has been reduced, Kerttula told DCD: "Modern gas engines can start in less than a minute, which brings them within the world of emergency power supply." Meanwhile, gas supplies are more widely available, and liquid natural gas (LNG) has become more viable as a stored source, he said.

Modular Block is based around the Wärtsilä medium-speed 34SG (spark-ignition gas) generators, and the enclosure also includes auxiliary units specific to the engine, allowing installation within a few weeks, instead of several months by doing away with the need for a permanent custom building.

The modular concept can also be dismantled and moved or expanded too, so it could potentially be used for rental, or temporary requirements, for instance when a local grid has medium term availability issues.

The medium-speed engine is more efficient and cheaper to run than containerized high-speed engines or gas turbines, the company says.

The use of a gas-fired engine is more environmentally friendly than a diesel, and could enable data centers to use a micro-grid, making them more cooperative with the local grid, said Kerttula. For instance, a data center powered this way could be built close to centers of population where waste heat reuse is possible, drawing power from the grid when local renewable sources are available, and contributing power to it when they are not.

The engine can run on most countries' gas grids, said Kerttula and could also make use of locally produced biogas, for instance for agricultural waste, potentially making data centers more independent and useful to the grid.

The product is being officially launched at the Africa Energy forum in Lisbon, Portugal.