Announced at the Luxembourg Embassy in London, the partnership connects Volta’s recently upgraded facility located between Shoreditch and the City of London, and LuxConnect’s four facilities that total 158,230 sq ft (14,700 sq m) of data center space. 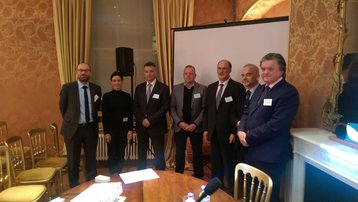 “We would like to introduce a new alliance, an alliance between Volta and LuxConnect,” LuxConnect CEO Roger Lampach said at the event.

“We have put together this idea that we should develop this and have more data centers within this alliance because we are convinced that such an alliance - due to the changing economic and political landscape - is an advantage for all the parties especially if you can operate in different countries.”

He continued: “Volta is more or less the same size as LuxConnect and we also have the same interest for our customers, our partners.”

Volta MD John Arnold said: “We are delighted to be working with LuxConnect. We spent a bit of time in the background, looking at how we can work together and what was absolutely clear from us was that the culture of the team at LuxConnect had the same culture as at Volta, which was very much a flexible attitude and a can-do attitude. We’re very much looking forward to working together.”

The Ambassador of Luxembourg to the UK, His Excellency Mr Patrick Engelberg congratulated the companies on the alliance, but added: “As an ambassador in the UK, addressing a business audience, I cannot avoid mentioning Brexit. Brexit is dominating the news and, I would add, our minds as well.”

“I was in Birmingham last Sunday, listening to the Prime Minister outlining the next steps and setting a date for this famous letter triggering Article 50. This will happen by the end of March 2017. The negotiation phase which will follow immediately will certainly be tough at certain moments as many interests must be defended on both sides, but ultimately we all want it to be a success.“

He said that he “would like to stress the fact that Luxembourg will not only continue to entertain excellent business and trade relations with the UK, but intend to develop and expand them. That was the message conveyed by the Deputy Prime Minister, who happens to be our minister of economy at the same time, and the minister of finance were both here in London meeting many people in the government.

“The aim is not in fact business away from the UK, but to be complimentary, offering partnerships, and building bridges whatever the outcome of the Brexit negotiations will be.”

Speaking more specifically about data centers, Engelberg said: “You may wonder why Luxembourg has data centers. This is a typical example of how successive governments, whatever the political color - and I must stress this - have developed the economy.

“Luxembourg is well known for hosting the biggest financial center in the Eurozone, and the second biggest in the EU after London, but diversification of the economy has always been a high priority of the government.“

He said: “Data centers very useful for our own economy, we need them ourselves, we have a very booming FinTech sector, biotech, the world’s biggest satellite company - we always like to be innovative and pioneering.

“We would be happy to welcome a new client like Toyota to Luxembourg, but we would be running out of space. We have to concentrate on high value, high tech industries. The government is fully supporting all of the initiatives and knows how to create a business friendly environment, and of course data centers, like many other sectors benefit from it.”