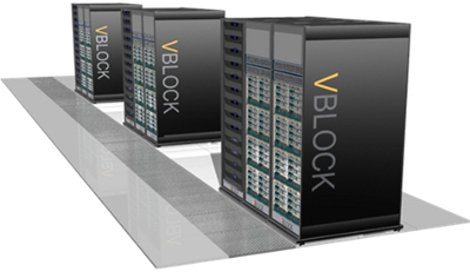 VCE, the converged-infrastructure company created by Cisco, EMC and VMware to sell Vblock, a pre-integrated and virtualized IT system that consists of all three vendors' products, unveiled three new variations of the solution on Monday.

The products are System 340, the general-purpose Vblock line, and two systems optimized for specific workloads.

'Our hardware for Oracle database is better than Oracle's'

One of the two new specialized systems is optimized to run the high-end Oracle database, and the second one was designed as virtual desktop infrastructure (VDI). The systems follow VCE's launch of its first specialized Vblock, optimized for SAP Hana, in February.

Todd Pavone, EVP of product development and strategy at VCE, said Oracle was only the first use case for the database system. VCE has plans to launch versions for IBM's DB2, SQL and other database types in the future.

The product will compete directly with Oracle's own hardware, such as Exadata, SuperCluster and the Database Appliance, engineered specifically to run its databases. While Oracle is a “tremendous technology at the database level,” VCE can do a better job running it at the infrastructure level, Pavone said.

“We know we're going to do very well” from the performance perspective, he said, adding that Vblock provides higher IOPS at lower price than Oracle's hardware does. “This is all about how can we run Oracle better.”

While VCE is pitching the solution as infrastructure for the Oracle database, it can still be used as a general-purpose system, which Pavone said was another gain on the database giant's engineered systems. Customers want to be able to run other applications on these machines, not just databases, he said.

Driving these messages home with the market is likely to be a steep climb for VCE. Oracle leads in the market for hardware pre-engineered for specific software, according to a Gartner report.

Other leaders in the category are IBM and HP, but both are far behind Oracle in terms of revenue from what Gartner refers to as “integrated workload systems.”

Pavone's pitch for the VDI-optimized Vblock was quite simple: there are only two metrics that matter with VDI – cost per desktop and performance – and, given VCE's access to the latest and greatest from its owners, such as EMC's latest flash memory solutions, the system will do well on both fronts.

The new Vblock System 340 is aimed at a range of customer types, Pavone said. “The product will actually span across mid market all the way up to large enterprise.”

A typical application for a mid-size company is to run its entire data center on Vblock, he said. VCE has plenty of customers that have gone that route with the 300 family, the vendor's most successful product family so far.

The 340 offers twice the performance and four times the capacity of its predecessor, according to VCE.

VCE will be first to benefit from Cisco's Whiptail buy

Pavone sees this tight coupling with technologies by companies that own VCE as a huge market advantage. He expects the company to be the first to benefit from Cisco's acquisition of the flash-memory vendor Whiptail earlier this month, for example.

“They (Cisco) are going to take that technology and use it to build out fabric-based server-side flash to enhance UCS servers,” he said. “We'll take advantage of that.”

Pavone attributes success to shrinking IT budgets. A major appeal of converged infrastructure is reportedly lower operational costs, since all the moving parts are pre-integrated and managed through a single pane of glass.

VCE was formed in 2009. The company started as a provider of a reference architecture that combined the owners' products into an integrated infrastructure solution.

In 2010, it changed its business model to become a systems company. “We're on our fourth generation of technology today,” Pavone said.

Ahead of all in prepackaged IT

VCE has done well against other players in the converged-infrastructure market, according to a Gartner report. The market-research firm splits this market into three segments: integrated reference architecture systems (where NetApp and Cisco's FlexPod is the only player), integrated workload systems (hardware engineered for and preloaded with specific software) and integrated infrastructure systems.

VCE is in the third category, which it leads in terms of revenue, Gartner said in its Data Center Hardware Integrated Systems, 1Q11-2Q12 report. The company made about US$223m in sales in the second quarter of 2012 (the latest quarter analyzed in the report).

For comparison, HP (second in the segment) made $92.5m in integrated-infrastructure system sales during the quarter. HP's revenue growth rate during the period analyzed was higher than VCE's, however.

Other vendors in the market segment considered by Gartner were (in descending order by revenue) Hitachi Data Systems, IBM, Dell and Oracle.