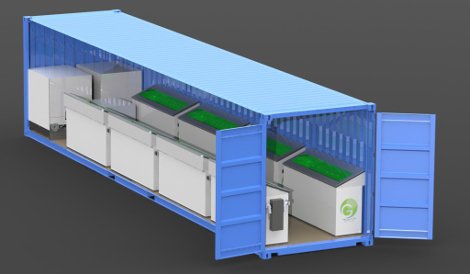 The US Department of Defense has bought two data center containers where servers are submerged in oil for more efficient cooling from Green Revolution Cooling, an Austin, Texas-based company.

The data center container is a new product for Green Revolution. Christiaan Best, the company’s CEO, said it comes as a standard 40-foot ISO container with the company’s unorthodox dielectric-fluid-filled CarnoJet racks, a cooling tower and power distribution equipment.

The DoD is the second customer to deploy the containerized solution. Best said he was not at liberty to disclose the name of the first customer.

He also could not disclose what purpose the DoD bought the containers for or their power capacity. The biggest appeal of containerized data centers is the ability to deploy data center capacity anywhere and very quickly.

Organizations buy containers to extend capacity of existing data centers or to quickly add a data center site where they do not already have one. According to anecdotal accounts, data center containers are popular with military organizations because they allow them to deploy temporary computing capacity in war zones.

Green Revolution decided to develop a containerized solution for a variety of reasons, Best explained. Not the least of them was to demonstrate how much cheaper it was to deploy CarnoJet then to fit out a traditional data center with air conditioners, air handlers, ducts and other cooling-system components.

“It’s going to be kind of game-changing because of its simplicity and overall cost,” he said. “This product line is going to be able to say, ‘Look, now we can show you how much money you’ll save.’”

The company says the solution costs US$2 per watt of power capacity the container is able to support. The customer has to supply their own backup power and a leveled place for the container to sit on.

Green Revolution’s CarnoJet units have been deployed in six countries across three continents, the CEO said. Because it is such an unusual approach to cooling, customers usually have a lot of questions, and a typical sales cycle is still quite long.

“We’re going against 30 years of preconceived notions, all the way back to Cray,” Best said. Now that a few big-name customers have agreed to speak publicly about their deployments, life has become easier, and the container product is meant to make it even more so.

A standard 42U CarnoJet rack is placed on the floor of the data center horizontally, taking up 13 sq ft of space. While it takes up more space than an air-cooled cabinet, it has no need for hot and cold aisles separating racks in traditional data centers.

The system accepts standard 19-inch rack-mounted servers, but the company modifies them to remove fans, encapsulate hard drives and replace thermal grease with an insoluble substitute.