The second of five planned facilities

The construction of Urbacon Data Centre Solutions’ second data center in Ontario is underway, less than a year after the company completed the first, reports Canada’s Real Estate News Exchange.

The wholesale colocation provider is planning a total of five facilities at the Barker Business Park, an industrial estate in Richmond Hill, Greater Toronto. It has another four data center locations across Montreal, Toronto, and Sault Ste. Marie.

Its parent company, Urbacon, is a construction and project management firm with experience in civil engineering projects, interior design, as well as property planning and development. 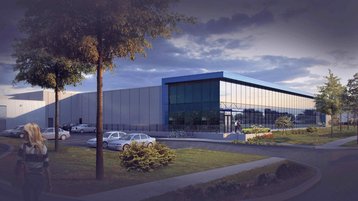 Urbacon’s vice-president of Properties and Development Management, Peter Russell, said the site servicing had commenced, “with underground installation of storm and sanitary sewers, water and electrical,” and that “building foundation and structural steel” would follow shortly.

What’s more, earlier this year Urbacon entered a joint venture with Summit Industrial Income REIT. The trust bought a 50 percent stake in DC1 (and half of the associated construction debt), with the option of acquiring a share of DC2.

The construction process for DC2 was precipitated by the full lease of the first facility by an unnamed cloud service provider, which initially leased half of the site when it was completed in June last year, and exercised the option to lease the remaining space since.

This put a degree of urgency into the construction of DC2, explained Russell: “Our intention is to have at least one facility under construction and available to respond to short-term market demands.” He added that plans for the third facility are already in motion.

“DC3 is in the final stages of municipal approval,” Russell said.