Why not shift your AWS instances from Frankfurt to Stockholm?

Uptime Institute has launched a tool that shows ways to save carbon and money by migrating workloads to different zones within the AWS, Microsoft Azure, and Google clouds.

Cloud Carbon Explorer compares the carbon, cost, and latency of different cloud centers, and offers suggestions for changes to a customer's workload distribution. It comes as Uptime releases a new Intelligence Report which uses publicly available data to quantify the emissions, resiliency, and costs of different architectures. 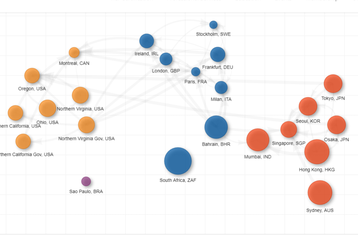 Uptime says most organizations choose their cloud region based on placing the application close to end users to minimize latency and keeping data within a country in order to avoid breaching data protection requirements.

However, most users can tolerate the level of delay caused by accessing an application in a neighboring country, which will normally be a matter of 10ms or so.

They are also over-sensitive about data protection, says Uptime: "If there are no legal reasons to keep data in a jurisdiction, cloud users can often migrate their workloads to a nearby region and gain reductions in their carbon footprint; this migration can also result in lower costs."

In the launch documents, Uptime quotes an example: "You’ll find when examining Amazon Web Services in Frankfurt, there are feasible migration paths to Paris, Stockholm, Milan, and London - which all provide significant reductions in carbon and cost, with a relatively small increase in latency."