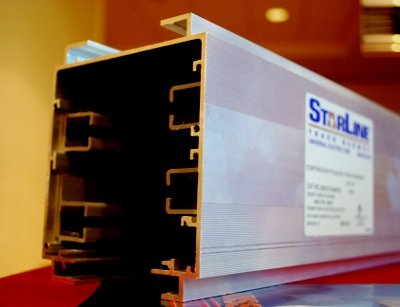 In a traditional set-up, high-voltage AC power is fed into the UPS system, where it is converted to DC to charge the batteries. It is then converted back to AC before being fed to the servers’ power supplies. Every conversion step results in electrical losses, driving down energy efficiency of the system.

Tim Martinson, Starline DC solutions director at UEC, said the company's new solution, called Starline DC, is a full electrical system for the data center. The system includes components that take power through AC-to-DC rectification, feed it into an end-cap box on a busway, from where it goes into drop boxes that feed power to each rack.

The drop boxes, which include circuit protection and metering, feed power to rack power distribution units, which contain plugs designed specifically for 380V DC. The package also includes cables that connect PDUs to the IT power supplies.

UEC also helps IT vendors apply a new standard for 380V DC power developed by the EMerge Alliance to manufacturing power supplies for the products they deliver to customers interested in using high-voltage DC power in their data centers.

"We have a direct working relationship with majority of the IT [OEM] community," Martinson said.

There is a number of end users interested in deploying the solution in their data centers, he said. All of them are currently in evaluation stage.

They include a financial company that has created a lab that uses renewable sources to generate energy for portion of the electrical infrastructure and is looking at deploying UEC's solution. Several other large companies have ongoing proof-of-concept projects testing the solution.

The solution scales in a modular fashion in 20kW increments. This is the capacity of a single rectifier module.

Customers can scale 20kW at a time up to a fully loaded rack of 280kW, Martinson explained. Capacity can be scaled further by adding 280kW modules.