NTT and Tokyo Century are to form a data center partnership in India.

Tokyo Century is a finance company that mainly provides leasing and installments services for equipment and machinery, as well as investment in securities, silent partnerships, and cash loans.

Under the new deal, NTT said Tokyo Century will be the first joint investor in its data center business.

“Mumbai, India, is an area where many data centers are planned to be developed in the future, and the collaboration between NTT and Tokyo Century in data center would be a significant project in India,” NTT said in a statement. “NTT and Tokyo Century will continue to cooperate to support the realization of a sustainable society by resolving social issues.” 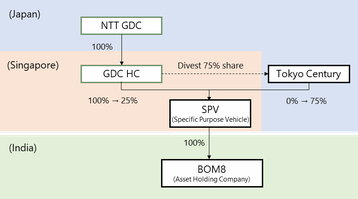 The ownership structure of the new agreement – NTT

NTT, through BOM8, is developing a 310,000 square foot (29,000 square meters), nine-story data center in the city with 24MW of capacity. This facility, designed to serve hyperscalers, is expected to be completed in February 2022.

Under the terms of the agreement, GDC HC will divest 75 percent of its shares in the SPV to Tokyo Century. NTT and Tokyo Century will then jointly own the SPV that owns BOM8, which holds the data center assets in India.

Earlier this year, NTT announced plans to plans to double its data capacity in India through $2 billion in investment. In March the company bought 55 acres of land outside Mumbai for $106 million from steelmaker Mukand.