Tens of thousands of Delta passengers grounded by outage

A six-hour data center outage in Atlanta left more than 451 Delta Air Lines flights grounded on Monday, with the company blaming a power cut for the system failure.

The “major system-wide network outage,” which started at about 2:30am EDT and ended at 8:40am, meant thousands of the airline’s passengers around the world were left stranded in airports.

Ground to a halt

Delta put in place what it called a “ground stop” at 5am, said the company’s chief executive, Ed Bastian, which led to cancellations and delays throughout the day.

The disruption extended into Tuesday, with another 250 flights canceled and more than 200 others delayed.

Flights that were already in the air at the time the outage started were able to continue to their destination largely unaffected, with only routine messages to and from the flight deck downed.

The outage hit check-in services, which rely upon the airline’s central reservations system, as well as messages about fuel, baggage, and cargo that have to be sent before take-off. In addition, aircraft flying to the US are not allowed to depart until a full and complete passenger manifest has been supplied to the American authorities.

Delta has apologized to its passengers and offered details about refunds and change fee waivers. 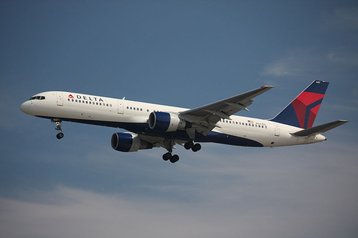 The airline, which is among the world’s largest, said the outage was caused by a power failure at its Atlanta headquarters. The Independent newspaper reports that Georgia Power, which supplies electricity to the building, blamed the outage on an overnight failure involving switchgear.

However, Georgia Power spokesman John Kraft said: “It was a failure of Delta equipment… there wasn’t an area power outage.” The company said the Delta problem did not affect other power customers.

“Our crews responded to the site this morning and we continue to work with the team at Delta,” Kraft said.

@GeorgiaPower Disgusted #Delta used term “power outage” as a PR ploy to avoid blame for their own failure.Kudos to you folks for outing them

A post on FlyerTalk forums, meanwhile, suggested the cause of the downtime was a fire.

“According to the flight captain of JFK-SLC this morning, a routine scheduled switch to the backup generator this morning at 2:30am caused a fire that destroyed both the backup and the primary. Firefighters took a while to extinguish the fire. Power is now back up and 400 out of the 500 servers rebooted, still waiting for the last 100 to have the whole system fully functional,” it said.

When approached by NBC News, Delta declined to comment on the cause of the outage, citing an ongoing investigation.

The newspaper cited travel expert and chief executive of FareCompare, Rick Seaney, who said antiquated IT infrastructure is prevalent among major airline operators and could have been to blame.

“Only recently airlines have been flushed with cash,” Seaney said. “There hasn’t been a lot of cash to add into their infrastructure.”

Airlines that have merged or that have been acquired, such as Delta, which joined with Northwest in 2008, it can be very difficult to update IT infrastructure, he said.

He speculated that there could be more disruption as a result of outdated systems as US Airways switches to using American Airlines’ infrastructure later in 2016. The companies completed a merger deal last year.

Human error could have been the root cause of the Delta downtime, Seaney added.

“There’s no doubt that a Fortune 500 company should have backup systems that kick in for these problem[s],” he said. “If they don’t, it should be somebody’s head at the airlines.”

A Delta spokesperson told NBC that the company does have a backup system but that after the power loss some of its critical systems and network equipment didn’t switch over to the backup.

The timing of the Delta outage was particularly unfortunate as it coincided with the beginning of the working week, when the day’s first flights were to depart for Europe, in addition to evening departures to Asia.

IT infrastructure outages within airline operators are often more strongly felt than those in other industries because of the capacity for logjams to develop as departure gates are not freed up. Further delays arise from flight crews being left out of position and being left unable to follow the flight timetable, meaning it can take about a week to recover regular operation.

Delta’s downtime follows the July outage experienced by Southwest Airlines Co., which suffered a computer router failure after a flood. The company was forced to cancel about 2,300 flights and delay more than 7,000 flights over three days.