As do stock markets

On Friday, President Donald Trump signed an executive order prohibiting entry to the US by people from seven Muslim-majority nations for at least 90 days, effective immediately.

In response, the tech industry - which already suffers from a strained relationship with the new administration - has overwhelmingly condemned the move, with some taking steps to return employees or help those affected. 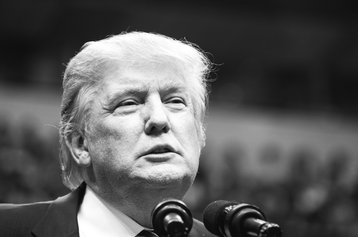 Citizens of Iraq, Iran, Sudan, Somalia, Syria, Yemen and Libya will be banned from entering the country for at least 90 days, while Syrian refugees face an indefinite ban. The US Refugee Admissions Program will be suspended for 120 days.

The order includes dual-citizens and green card holders, although confusion exists over the exact scope of the ban.

“I hereby proclaim that the entry of nationals of Syria as refugees is detrimental to the interests of the United States and thus suspend any such entry until such time as I have determined that sufficient changes have been made to the USRAP to ensure that admission of Syrian refugees is consistent with the national interest,” the executive order, thought to have been written mainly by Steve Bannon and Stephen Miller, said.

After much of the media and other critics called the order a “Muslim ban,” White House chief of staff Reince Priebus said on NBC News: “This is not a Muslim ban, as the media is falsely reporting. This is not about religion – this is about terror and keeping our country safe.”

However, some have noted that during the election campaign Trump called for “a total and complete shutdown of Muslims entering the United States until our country’s representatives can figure out what is going on,” something which is still on his website.

Trump has said that priority will be given to refugees who are of a religious minority in those regions, with the President singling out Christians as those in need.

Criticism also exists over how the order was carried out, reportedly with senior officials at Homeland Security unaware of the ruling until it happened. Disagreement exists over the status of legal permanent residents from those nations, as well as the criteria for case-by-case admissions that the order allows.

Temporary reprieve was granted on Saturday after two judges blocked the Trump administration from enforcing removal of refugees and travelers from US airports.

Among those reacting to the unprecedented new order is the tech industry. Originally mostly hostile to Trump during the campaign, executives quickly sought to make peace when he won the election. Senior business leaders from the tech world traveled to meet Trump, and made vague comments of support for some of his appointments and statements.

But the recent travel ban seems to have hit a particular nerve among the tech community, partially due to the industry’s reliance on hiring highly skilled workers from around the world on H1-B visa schemes. Ahead of the election, the tech industry lobbied aggressively for an expansion of the program, but that seems increasingly unlikely - especially with attorney general nominee Jeff Sessions having long criticized the scheme. Prior to becoming Senior Advisor to the President, Stephen Miller worked for Sessions as his communications adviser.

The tech industry, which mostly leans democrat, likely also worries about the impact of the ban on its ability to conduct business around the world, as well as public perception, internal employee perception and perhaps genuine disconsternation from its business leaders.

Larry Summers, former US Treasury Secretary, told Bloomberg TV: “As global businesses, they have a huge stake in the United States being a nation of the Statue of Liberty rather than being a nation of refugee camps and barbed wire.

As news of the ban spread, Alphabet’s Google immediately recalled roughly 100 employees that it believes could be affected by the order.

“It’s painful to see the personal cost of this executive order on our colleagues,” CEO Sundar Pichai wrote in an internal memo obtained by Bloomberg. “We’ve always made our view on immigration issues known publicly and will continue to do so.”

A Google spokesperson said: “We’re concerned about the impact of this order and any proposals that could impose restrictions on Googlers and their families, or that create barriers to bringing great talent to the US. We’ll continue to make our views on these issues known to leaders in Washington and elsewhere.”

USA Today reports that Google launched its largest crisis campaign ever - a $2 million fund that can be matched with up to $2 million in donations from employees for four organizations: the American Civil Liberties Union, Immigrant Legal Resource Center, International Rescue Committee and UNHCR.

In addition, Google co-founder Sergey Brin was spotted at a protest over the ban, saying that “I’m here because I’m a refugee” and that he was acting in a personal capacity.

Microsoft has also reached out to 76 of its employees to return them to America, and on Thursday issued a securities filing that said that immigration restrictions “may inhibit our ability to adequately staff our research and development efforts.”

The company’s president and chief legal officer, Brad Smith, said in an email to employees: “As a company, Microsoft believes in a strong and balanced high-skilled immigration system. We also believe in broader immigration opportunities, like the protections for talented and law-abiding young people under the Deferred Access for Childhood Arrivals (DACA) Program, often called “Dreamers”.

“We believe that immigration laws can and should protect the public without sacrificing people’s freedom of expression or religion. And we believe in the importance of protecting legitimate and law-abiding refugees whose very lives may be at stake in immigration proceedings.”

CEO Satya Nadella added on LinkedIn: “As an immigrant and as a CEO, I’ve both experienced and seen the positive impact that immigration has on our company, for the country, and for the world. We will continue to advocate on this important topic.”

Facebook CEO Mark Zuckerberg said in a post on his social network: “The United States is a nation of immigrants, and we should be proud of that. Like many of you, I’m concerned about the impact of the recent executive orders signed by President Trump.”

He added: “We should also keep our doors open to refugees and those who need help. That’s who we are.”

Twitter CEO Jack Dorsey used his network to say: “The Executive Order’s humanitarian and economic impact is real and upsetting. We benefit from what refugees and immigrants bring to the U.S.”

Airbnb CEO Brian Cheskey also tweeted: “Open doors brings all of US together. Closing doors further divides US. Let’s all find ways to connect people, not separate them.”

Cheskey’s company said that it will provide free housing to refugees and anyone not allowed into the US, with more details to be presented soon.

Netflix CEO Reed Hastings said on Facebook: “Trump’s actions are hurting Netflix employees around the world, and are so un-American it pains us all. Worse, these actions will make America less safe (through hatred and loss of allies) rather than more safe. A very sad week.”

Amazon remained mostly impartial, telling employees: “From the very beginning, Amazon has been committed to equal rights, tolerance and diversity — and we always will be. As we’ve grown the company, we’ve worked hard to attract talented people from all over the world, and we believe this is one of the things that makes Amazon great — a diverse workforce helps us build better products for customers.”

He tweeted: “The blanket entry ban on citizens from certain primarily Muslim countries is not the best way to address the country’s challenges… Many people negatively affected by this policy are strong supporters of the US. They’ve done right, not wrong & don’t deserve to be rejected.”

Speaking more broadly on his approach to Trump, Musk told Gizmondo: “Simply attacking him will achieve nothing. Are you aware of a single case where Trump bowed to protests or media attacks? Better that there are open channels of communication.”

Matters will likely get harder for the tech industry, with Bloomberg getting a preview of a potential upcoming reform. The draft proposal says: “Our country’s immigration policies should be designed and implemented to serve, first and foremost, the U.S. national interest.

“Visa programs for foreign workers … should be administered in a manner that protects the civil rights of American workers and current lawful residents, and that prioritizes the protection of American workers – our forgotten working people – and the jobs they hold.”

Outside of the tech industry, markets in general have been impacted by the ban. Spreadex financial analyst Connor Campbell told The Guardian: “In what is a fairly significant development the Dow Jones opened under 20000 this Monday, causing the Trump travel ban losses to increase across the board.

“The Dow plunged by 150 points after the bell, US investors equally unhappy with the instability brought on by Trump’s actions as their European cousins.

“Now, the fact that a potentially March rate-hike signalling Fed meeting looms on Wednesday, alongside the first Trump-era non-farm jobs report on Friday, may have something to do with the Dow’s losses. However, there is no doubt that the main catalyst for the drop has been the Muslim travel ban executive order from the President, not for moral reasons that have caused outrage elsewhere but instead the potential ramifications it could have for trade from the Middle East and elsewhere.”