Equinix, Digital Realty and NTT are responsible for almost 28 percent of the worldwide colocation revenues

The world’s largest colocation providers are continuing to grow their revenues faster than the rest of the market, increasing their market share and consolidating the industry in the hands of the few.

According to Synergy Research Group, Equinix, Digital Realty and NTT all had a bumper quarter, due in part to their “aggressive” merger and acquisition strategies - for example Equinix has closed no less than six major deals in the past 12 months.

“When it comes to operating data centers and colocation services, scale and geographic reach are important,” said John Dinsdale, chief analyst and research director at Synergy.

Synergy publishes a quarterly report tracking the ebb and flow of the worldwide colocation market. 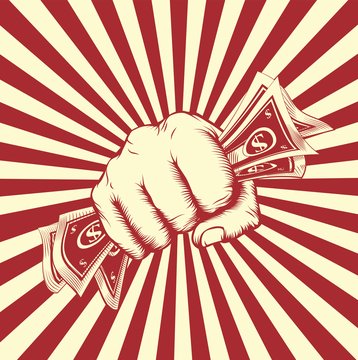 According to the latest study, Equinix, Digital Realty and NTT maintained their market lead by a comfortable margin: in the first quarter of the year, Equinix controlled 13 percent of the worldwide market, Digital Realty was responsible for around eight percent, and NTT – around six percent.

“In order to help achieve that scale there needs to be constant investment in existing data centers, in addition to which we’ve seen $42 billion in data center M&A deals over the last 36 months, with Equinix and Digital Realty accounting for half of the total,” Dinsdale said.

“There are good reasons why those two are the leading players in the colocation market.”

Following the top three were KDDI and China Telecom, with three percent market share each. And rounding out the Top 10 were CyrusOne, Interxion, Cyxtera, Global Switch and Coresite, with approximately two percent each.

According to Synergy, Digital Realty has been helped along by its acquisition of DuPont Fabros – the largest deal this industry has ever seen - which closed in September 2017. This purchase enabled the company to add retail colocation to its extensive wholesale operation, something that is clearly visible on the chart below. 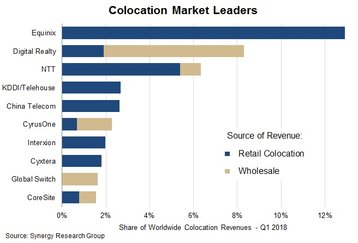 Synergy also noted that Equinix had made two more acquisitions in the first quarter of the year – something that is likely to bear fruit in the second quarter.

In terms of geography, APAC and Latin America were showing the highest growth rates in the first three months of the year.