Synergy: AWS dominates the public cloud market across the world

AWS is still the world’s favorite public cloud provider, according to a report comparing companies’ performance in the first quarter of 2018, published by Synergy.

Amazon’s public cloud services generated more revenue than any other provider in all four regions, as well as on a global scale, confirming once more that in this market, AWS is king.

AWS was followed by Microsoft, Google, Alibaba and IBM, but no other provider successfully dominated in more than three georgraphic markets.

Microsoft was outranked by Alibaba in the APAC region, but its revenue there exceeded that of Google.

Being the fourth largest public cloud provider worldwide, Alibaba’s success was uniquely due to its large share of the APAC market, most notably in China, which makes up a third of the region’s market.

Meanwhile, IBM came fifth in global rankings, while both Salesforce and Tencent made it onto the leaderboard - Salesforce was the fourth most prominent cloud vendor in the APAC region and the fifth in NAM and EMEA, and Tencent ranked fifth in APAC.

AWS alone accounted for 40 percent of the public cloud market (though, according to Gartner, it was closer to 45 percent in December 2017) and together with Microsoft and Google the consortium made up more than 60 percent of the market.

China goes its own way

John Dinsdale, Synergy’s chief analyst, said companies wishing to assert dominance in the “essentially global” public cloud market would have to engage in a “game of scale.”

“To be a market leader demands vast ongoing investments, a global presence and a global brand.”

He said that exceptions to the rule exist, most notably the Chinese market, and added that local data sovereignty and regulatory issues “might enable local companies to carve out niche positions for themselves,” but that this would only enable them to be “small local players in a specific country or sub-region.” 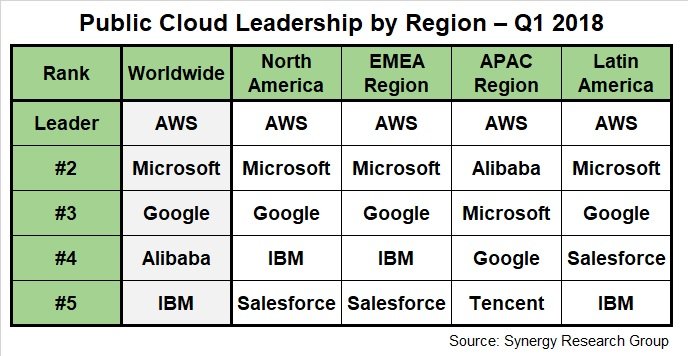 Unsurprisingly, in recent quarters, the three public cloud leaders’ revenues and share prices have continued to soar. Although Alphabet registers its Google Cloud Platform results in an ‘Other Bets’ category along with its hardware and Google Play divisions, and Microsoft bundles Azure financial performance into its Intelligent Cloud division, both companies have confirmed (and analysts have agreed) that their public cloud divisions have grown substantially year-on-year, too.

This was particularly true of Google: its Public Cloud Platform revenue grew at a faster rate than both AWS and Azure in the first quarter of 2017, approaching the 50 percent growth rate year-on-year.

The company has successfully captured its share of the cloud market with new products such as the Azure Stack, a pre-integrated hardware platform for hybrid cloud deployments, but also cloud-connected games.

And yet, Amazon was the first company to truly see the potential of cloud computing, investing large sums in its infrastructure long before others joined the race. AWS, whose annual revenue last year neared $18bn, now offers more than a hundred services, and the company plans to keep adding to this offering.

At its re:Invent conference in December last year, AWS announced the release of a new distributed load balancer, and launched its I3 Bare Metal instances. The latter struck another blow to colocation providers, whose strategy in a world increasingly dominated by cloud computing is to propose a hybrid infrastructure model for the systems that are difficult to virtualize.