Switch has three such sites in the United States, and five worldwide, all of which are similarly massive (or are planned to become so in the future). The company recently opened its Michigan Pyramid campus, and a few weeks ago it announced plans to launch a new availability zone in Atlanta. 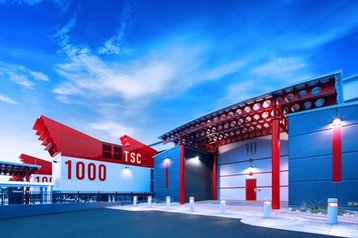 The company prides itself on being the largest multi-tenant data center provider in the US to run on 100 percent renewable energy. It now sources all of its energy through procurement agreements following its pledge to do so when it joined the US government’s American Business Act on Climate Pledge in 2015, and for which it received high scores in Greenpeace’s annual Clicking Clean report.

Switch claims that the facility is ”designed, constructed and operated to the same specifications as the company’s existing Las Vegas 8 and 9 data centers, all to Switch’s proprietary Tier 5 data center standard,”

Tier 5 is the in-house certification system launched last week, which Switch is proposing as an alternative to established standards such as the Uptime Institute’s Tier rankings,

Uptime Institute president Lee Kirby remains unconvinced, and told DCD that its extensive track record and vendor neutrality is what sets Uptime apart from proprietary classifications such as Switch’s.

Whatever the case, Switch celebrated the opening with a suitably impressive promo video, including an impressive tracking shot along - literally - a mile of power distribution and UPS systems: