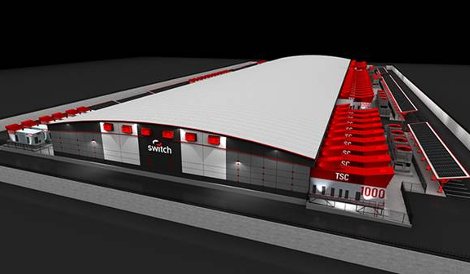 Switch, operator of the massive and massively flashy ex-military-staffed Las Vegas data centers branded SuperNAP, has brought another facility at its Sin City campus online. The company said SuperNap 8 was its most innovative data center design yet.

The SuperNAPs provide colocation and connectivity services to more than 600 clients in Las Vegas, ranging from startups to Fortune 100 enterprises. The newest facility builds on technology advances achieved in the design of SuperNap 7.

Switch CEO and Founder Rob Roy said, “It is our mission at Switch to solve problems, develop smart systems and think beyond tomorrow for the benefit of our clients, and SuperNAP 8 is a direct result of this mission.”

The decks are located nine feet apart and are attached to the concrete-and-steel shell of the facility, containing no roof penetrations. The Shield is designed to mitigate extreme-weather concerns involving data center roofs while also providing a maintainable roofing solution.

Switch is known for giving a sleek look to its data centers and hiring former military personnel as its security staff.

Switch announced plans to build SuperNAP 8 and SuperNAP 9 in January 2011. Together, the two projects would add 600,000 sq ft to the data center complex' total footprint, which at the time o the announcement was about 400,000 sq ft.