US cloud and colocation provider Switch is funding a one gigawatt solar energy generation plant in the plains of Nevada, joining forces with global investment firm Capital Dynamics, who will lead the project, and several of its data center customers to subsidize the gargantuan photovoltaic array.

Switch’s founder and CEO Rob Roy said that the project, ‘Gigawatt 1,’ will allow the state of Nevada to “harness the sun the same way Alaska harnesses its oil,” not just for itself but to provide western US states with “new jobs, tax revenue, economic diversification,” and energy independence. The project is projected to create 1,250 temporary construction jobs. 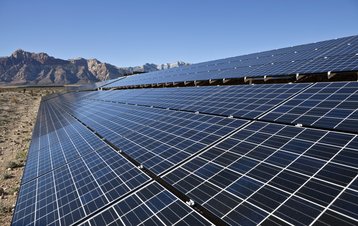 According to Switch, by providing for private and public sector customers, the solar array will decrease prices for consumers throughout the state and beyond.

It also goes against the current US administration’s energy policies, whose efforts to roll back years of investment in renewables, with large subsidies rolled out to prop up the coal industry and the decision to pull out of the Paris climate agreement, has seen pushback from a large portion of the country’s tech community.

The project will be built with American-made solar panels, a decision that may be related to the US government’s recent decision to put an import tariff on Chinese-made panels.

Greenpeace, the group behind the “Clicking Clean” report, which documents data center operators’ energy use and calls out companies for their reliance on fossil fuels,  commended the project, stating the consortium has set an example others should follow both to benefit the environment and the economy.