Sunbird Software – a former division of Raritan which was spun off as a separate company earlier this year – has launched the fifth iteration of its Data Center Infrastructure Management (DCIM) product.

“Sunbird DCIM enables data center resources to be used more efficiently and to be shifted to meet new and changing business demands.” 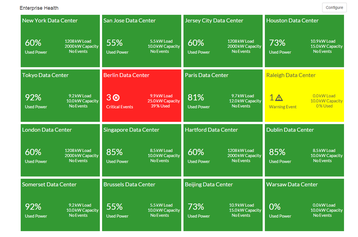 In June, the company announced it would be spinning off the DCIM business as Sunbird Software, in order to compete more effectively in the growing market. The decision was made by French industrial giant Legrand, which complete its acquisition of Raritan two weeks ago.

DCIM 5.0 is the first independent software release from Sunbird, but it still includes the familiar elements developed by Raritan, like the PowerIQ power monitoring software and dcTrack for operations.

Among the new features is an enterprise dashboard based on color-coded tiles that provide a dynamic view of the entire server fleet on a single screen. Each data center is represented by its own tile and its color is dependent on the health status.

Individual tiles can be drag-and-dropped, and users can drill through various logical layers down to the server level, with details on ports, power connections and energy usage.

There’s also a new mobile app which enables IT staff to track assets and initiate requests to install, move, and decommission hardware right from the data center floor.

“As the pressure for ‘faster, better, cheaper’ services continues in the delivery of IT services, efficient management of data center resources will be a competitive differentiator. Data center managers are turning to DCIM to keep pace and to gain the most from their existing physical data center resources and to reduce costs,” said Jennifer Koppy, research director for Datacenter Management at IDC.