A new supercomputer has been deployed at the University of Warwick, in Warwickshire, UK.

The £3 million ($4m) machine, named Sulis after the Celtic goddess of healing and sacred waters, is capable of 1.8 peak petaflops. 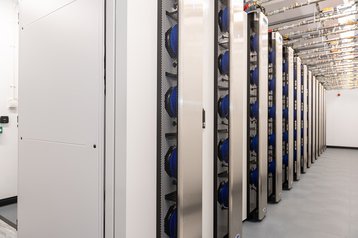 “Sulis is an HPC service developed with a strong steer from the HPC Midlands+ user community,” explained David Quigley, a professor of physics at Warwick and project lead at HPC Midlands+. “Many of our research activities are based on relatively modest simulations that we need to repeat many thousands of times with different inputs. This helps us make predictions based on large samples of data, understand how sensitive our models are to their inputs, and then quantify the robustness of our predictions.”

Sulis is housed in a purpose-built data center at the University of Warwick constructed by specialists 2bm. Sulis operates at a PUE of 1.12.

The system focused on high throughput parallel workloads and will conduct large ensembles of small-scale calculations to enable greater quantities of data sampling. As well as Chemists, material physicists, and astronomers, Sulis support Midlands-based PhD students in their research, with approximately 500 users expected to benefit from the facility during its lifetime.

“This is great news,” added Andrew Morris, a professor in the University of Birmingham’s School of Materials. “We have needed a dedicated high-throughput supercomputer in the UK for some time. Just like with weather forecasting, where you run the prediction hundreds of times to find the percentage chance of rain, the same approach is required for lots of other scientific problems. We are delighted that, as part of the HPC Midlands+ consortium we can deliver this exciting new supercomputer to EPSRC-funded researchers throughout the UK.”

Funded by the UKRI World Class Laboratories fund, the Engineering and Physical Sciences Research Council (EPSRC), and the HPC Midlands+ Consortium, Sulis is now the largest facility of its kind in the Midlands, replacing the previous HPC Midlands+ system Athena which was hosted at Loughborough in Leicestershire.

The HPC consortium, consisting of the Universities of Aston, Birmingham, Coventry, Leicester, Loughborough, Nottingham, Queen Mary University of London, and Warwick, will provide engineering and physical sciences’ researchers with access to the new facility.