SpaceX will today launch a Falcon 9 rocket carrying a high performance computing system built by HPE to the International Space Station. Update: The launch went ahead without a hitch, with the Dragon capsule successfully docking with the ISS.

The Spaceborne Computer is part of a year-long experiment by NASA and HPE to run a high performance commercial off-the-shelf (COTS) computer system in space to see how it reacts to the unique environment. 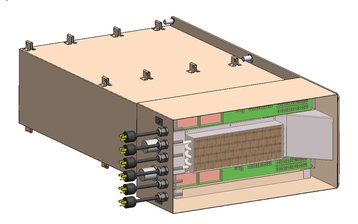 The length of the experiment is roughly that of a journey to Mars, during which a spacecraft will need high performance on board computing resources with high reliability. As the ship gets further away from our planet, the feasibility of using on the ground technology becomes smaller, with an up to 20 minute latency.

During that voyage, the computer will be subject to anything from radiation, solar flares, subatomic particles, micrometeoroids, unstable electrical power and irregular cooling.

Usually, NASA ruggedizes computers for space, but this time HPE is aiming to do that with software, which it says will manage real time throttling of the computer systems based on current conditions.

The computer is a 1 teraflop HPE Apollo 40 class system running Linux. Future tests will include sending different technologies and advanced computing systems, like Memory-Driven Computing, to the ISS.

The rocket launch is set for 12:31pm ET, with a 70 percent chance of go conditions.

It will be SpaceX’s 11th launch attempt of the year, its most in a single year. As the Falcon 9 is only going to Low Earth Orbit, it will have enough fuel left to attempt a landing by the Florida coast (Update: The landing was successful).

The rocket will be carrying a Dragon spacecraft filled with goods for the ISS, including HPE’s computer and 20 mice. Future launches will use refurbished Dragons, cutting costs and allowing SpaceX to focus on building Dragons suitable for ferrying humans to space.