Bibai City on Hokkaido, Japan’s northern island, has been working on the White Datacenter Project, a sustainability test site for using snow cooling in summer and venting off heat in the winter into greenhouses. The rest of the year, the data center is cooled by indirect air intake cooling.

In winter Bibai gets plenty of snow, between eight and 11 metres deep, but it has gone by the summer. Some of the townspeople decided it would be good to have snow in the hotter days of the summer and the Bibai Natural Energy Society and International Snow Club was formed. 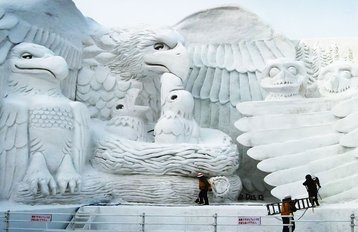 The research group developed a system whereby the winter snow was heaped up into giant mounds and covered with chips of insulating material. In summer the snow melts slowly and the cold water is used for air conditioning systems.

The White Datacenter Project was born from this. In 2014, the New Energy and Industrial Technology Development Organisation (Nedo), a Japanese government R&D organization, offered a five-year grant to investigate how snow removed from urban areas could be used to cool a data center.

In September 2015, a verification laboratory was opened: a single-story, steel-frame data center covering 110.46 sq m and housing 20 racks of hardware. The building is equipped with a cold air intake and snow cooling system. Close by, a food production verification laboratory was built and this comprises a 155.52 sq m greenhouse, a plant factory, and an aquaculture facility.

In the latter half of last September a heat exchanger system under the snow mound was used to cool the data center. Snow cooling maintained the ambient temperature of the building at 25C without the need for electric air cooling. In February, the indirect air cooling system had taken over and the exhaust heat was used to maintain temperatures in the agricultural buildings. Even in midwinter a minimum temperature of 15C was maintained using server exhaust heat alone. 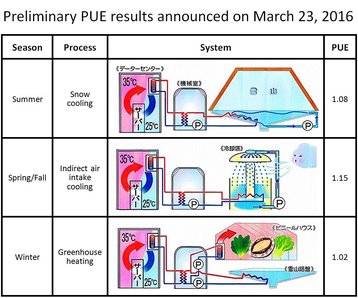 The initial results of the White Datacenter Project are encouraging (see PUE results table). Scaled up to a 3,000 rack facility and compared with data centers based in Tokyo, 1,000km (620 miles) south of Bibai, the White Datacenter is expected to show improved HVAC charges. The research team reckon this would be approximately 80 percent less than a traditional data center and 54 percent less than one with centrifugal chillers.

The test center is based in Sorachi Industrial Park in Bibai and it is hoped snow cooling will attract several companies to set up larger data centers on the 94 hectares (232 acres) site.