Shares in hard drive manufacturers spike due to Chia cryptocurrency

Shares of Western Digital and Seagate have rocketed due to Chiacoin.

The cryptocurrency requires digital storage space to be used to mine it, rather than the more process-intensive mining found in Bitcoin and Ethereum. Chia uses 100GB clusters on a hard drive called plots. The more plots, the higher chance of winning some coin. 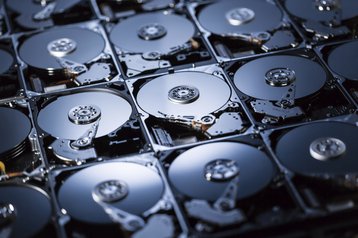 Since its launch earlier this year, the value of Chia has grown to nearly $28 billion. But demand for new high storage hard drives and SSDs has left stock in short supply in Asia.

Prices on drives that are still available has jumped significantly.

Due to the high demand - and the potential for much more demand if the cryptocurrency becomes a successful coin - shares in WD and Seagate jumped 24 percent and 19 percent respectively.

Investors hope that the storage industry will see the same aggressive demand spikes that beset the GPU market, causing sales to rocket.

The Chia currency has proved particularly popular by pitching itself as a greener alternative to Bitcoin - launching just as billionaire Elon Musk suddenly realized that Bitcoin was deeply damaging to the environment, and started tweeting against the coin he had previously been hyping.

But while Chia is less compute-intensive than most cryptocurrencies, it is still environmentally damaging as it relies on HDDs and SSDs to be used solely for the process of mining the coin. Manufacturing them has a large carbon footprint, and running them still requires significantly more power than no cryptocurrency at all.

Despite recent criticism of Chia, supply issues, and concerns that it can damage smaller drives, it is still growing rapidly. When we wrote about it on May 12, miners used 3.9 million terabytes of storage space for Chia. At the time of writing, miners are using 6.4 million terabytes.

Creator Bram Cohen, best known for developing the BitTorrent protocol, said that "around 100 Exbibytes" (115 exabytes) of storage will be required before plotting/mining on the platform stabilized.