The SEA-ME-WE 5 subsea fiber optic cable linking Southeast Asia to Europe via the Middle East has been completed on time, the consortium behind the project announced.

Built with a design capacity of 24 Terabits per second, the 20,000km cable system uses 100Gbps technology from the get-go to deliver fast access to consumers and businesses in Southeast Asia countries such as Singapore, Malaysia, Indonesia, Thailand and Myanmar.

SEA-ME-WE 5 (South East Asia - Middle East - Western Europe 5 Submarine Cable System) is expected to meet the projected quadrupling in demand for bandwidth between Europe and Asia in the next five years, offering the lowest latency for Internet traffic between the two regions. It will provide a sevenfold capacity increase along the corridor connecting Southeast Asia, the Middle East and Western Europe.

“The completion of the SE-ME-WE 5 project is a landmark system upgrade for all data users worldwide. This system facilitates a new age of digital transformation and innovation, catalyzing greater economic activities, trade and growth across three continents,” said Linette Lee, who chairs the consortium management committee behind SEA-ME-WE 5.

Construction of the cable network began in September 2014. The project is backed by a consortium comprising 18 global telecommunications players including Singtel, Telekom Malaysia, and Telekomunikasi Indonesia International (Telin).

A statement from the consortium noted that SEA-ME-WE 5’s main endpoints are not Cable Landing Stations (CLS) like in most such projects, but carrier-neutral Points-of-Presence (PoPs).

SEA-ME-WE 5 was plugged into the Tuas landing station in Singapore early last year.

In December 2016 Freddi Huang, the head of network engineering and operations at Telin Singapore, told DatacenterDynamics that the recently launched Telin-3 data center will be linked up to SEA-ME-WE 5. We were able to confirm that Singtel’s newly-opened DC West data center will also be linked to the cable system.

Elsewhere, SEA-ME-WE 5 stops off at the Indonesian city of Dumai on Sumatra, which is where the upcoming Indonesia Global Gateway Cable System (IGG) - which links up multiple cities across the Indonesian archipelago - will land. 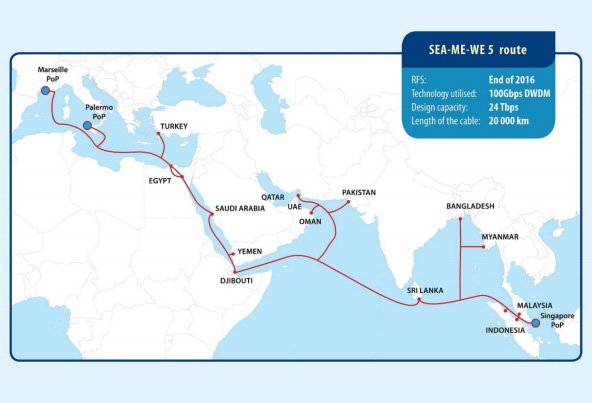