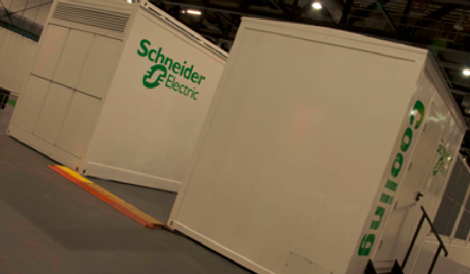 The 15 prefabricated modules come with IT, power and cooling equipment and the vendor's StruxureWare Data Center Infrastructure Management (DCIM) software. These modules are customizable and range in capacity from 90kW to 1.2MW.

While vendors customarily remain tight-lipped about specific details on customers of refabricated data center modules, some have said that the product is generally used for overspill - when a primary data center runs out of capacity and a quick expansion is necessary, for example - or for temporary deployments in places like combat zones.

Companies with well-known prefabricated data center products include Dell, HP and SGI, among others. One of the few outspoken users of the approach is eBay, which has deployed both Dell adn HP modules at its data center sites in Phoenix, Arizona, and Salt Lake City, Utah.

“This prefabricated approach inherently increases the predictability of the build process, since most of the construction occurs in a factory instead of in the field.”

The reference designs are “pre-engineered starting points” for data centers managers who want to optimize parameters like deployment speed, performance, reliability and cost for specific situations, according to Schneider.

The vendor promises to deliver already configured and tested modules to a customer site in 12-16 weeks, depending on project complexity. Deployment time can be minimized by doing site preparation and module production simultaneously, the company suggests.