Due to pop up across the US

Schneider Electric and Accu-Tech have merged as the technology partners to roll out Edge Presence's data centers in the US.

Backed by a $30 million investment announced this month, EdgePresence plans to place EdgePods - container-sized modular data centers - at cell towers across the US. According to an announcement this week, these will be Schneider's EcoStruxure units, deployed by IT distributor Accu-Tech. 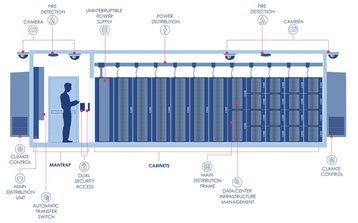 Formerly known as Modular Life Solutions, EdgePresence announced plans to deploy its data centers across 20 markets in the US in 2019. The company has partnered with American Tower to add local Edge data centers in Atlanta which complement American Tower's purchase of the Colo Atl data center.

EdgePresence needed partners to help it simplify the deployment and management of its EdgePods, and has now announced that these will be Schneider Electric to provide the EcoStruxure micro data centers, and Accu-Tech to simplify their deployment.

“Businesses are increasingly relying on next-gen technologies and applications to power their businesses, but often don’t have the IT infrastructure needed to help them scale and meet demand,” said Doug Recker, CEO of EdgePresence. “We develop unmanned, modular data centers at the edge to give customers in various markets across the US the network access and connectivity they need."

EdgePresence plans to get the small facilities to places that haven't previously had local data centers, and will use Schneider products including the EcoStruxure IT Expert cloud-based DCIM product, and Schneider's monitoring and dispatch services for remote troubleshooting and on-site service.

The EdgePods will also include Symmetra uninterruptible power supplies (UPS), NetShelter Rack PDUs, and the Netbotz monitoring and management system.